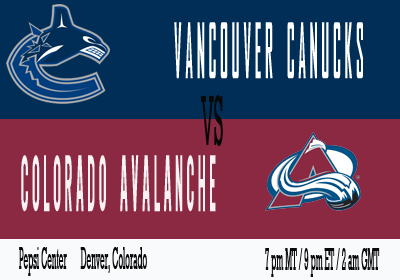 The Avalanche kick off a crucial 5-game home stand tonight. These 5 games are an important test for the Avalanche, and there's no better opponent to start things off with than the Vancouver Canucks. Why? 4 of these 5 games are against teams above the Avalanche in the standings. IF the Avalanche are for real, they need to prove it by hanging with clubs like the Canucks - a team they've defeated just once in the last 9 tries.

Theoretically, this should be a blood bath...but let's not get hasty. Check out the numbers. Both teams can score goals and both teams can convert on the powerplay. At even strength, the Canucks have outscored their opponents by 20 goals. The Avalanche are right there with them, at +13. The difference, of course, is the penalty kill. The Canucks are very good at it, the Avalanche are not.

And now the Avalanche are without their #1 penalty killer in Ryan O'Reilly, who, thankfully is going to miss just a couple of weeks after that frightening fall on Friday. Clearly, the plan of attack will be to stay out of the penalty box and hope to stay with the Canucks at 5 on 5.

All that is well and good, but it's not exactly awe-inspiring. Instead, I honestly hope the Avs give the Canucks plenty of opportunities with the man advantage and stuff that frightening power play. It's time for the Avalanche to quit with this mulling-around-the-middle-of-the-pack crap. I want them to take the bull by the horns and show us that, yes, they are a damn good hockey team. It's time to wake up, you unipron wonders. Let's kick the snot out of the #1 team in hockey and get this bangety bang bus ROLLING again. Lawinengefahr. It. Is. On.