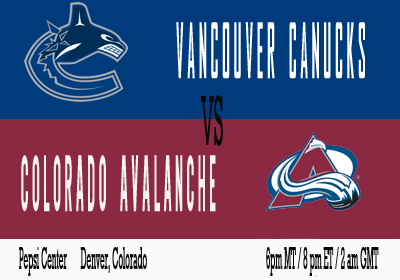 Instead of one preview today, we're giving you three. You pick your favorite.

Glass Half-Full Preview Version: The Colorado Avalanche host the Vancouver Canucks tonight in a battle of the two best NW division teams. Tonight's game will feature two of the best offenses in the league. The Avs love to play against the Canucks; both Milan Hejduk and John-Michael Liles have more points and Matt Duchene has more goals against the Canucks than any other NHL team and Craig Anderson has 1 career shutout against Vancouver. Since the lockout, the Avalanche are 21-13-4 against the Canucks in head-to-head action.

Glass Half-Empty Preview Version: The Colorado Avalanche host the Vancouver Canucks tonight in a game that the Avalanche need to win. The Avs are already 6 points behind the Canucks in the NW Division race; a loss tonight drops them further back and also guarantees the Canucks a head-to-head tiebreaker against the Avalanche. Although both teams have high-powered offenses, only one has figured out how to keep the puck out of the net as well. The Avalanche dominated the Canucks in head-to-head play in the first four years of the lockout, winning the season series every year and going 19-7-3 overall (including the 2008-2009 season). Since then, though, the Avs are just 2-6-1 against Vancouver and have been outscored 36-21. Although Anderson does have a shutout, he's collectively just 2-8-1 with a 3.50 goal against average against Vancouver. And Duchene has yet to record an assist against the Canucks.

Mile High Hockey Version: The bang bang bus is running on fumes right now, but I think I have just the answer: Swedish twins. Picture it - the bang bang bus rolls into a quiet Denver town and picks up some freaky Swedish twins who are subsequently abused and humiliated for our enjoyment. Another victim of the bang bang bus. Who wouldn't pay $19.99 in a discreet, monthly credit card charge for that? Of course, Craig Anderson will get injured again and Peter Budaj is the SUXXORS, but we can always blame Tyler Arnason right? Suck it Corsi. Oh look, cupcakes....