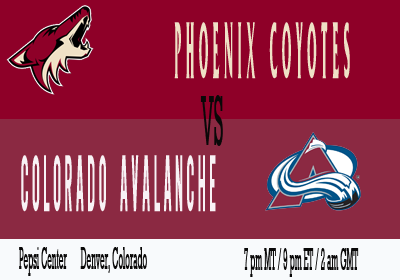 This time last year the Phoenix Coyotes and the Colorado Avalanche were coming out as two of the best stories in the NHL, with both teams getting new coaches and players after disappointing previous seasons. Phoenix and Colorado both wound up doing very well with Colorado getting the short end of the accolades; yes Tippett, we're still mad that Sacco didn't win coach of the year. This season, the two teams haven't bumped their success from last season into a spot in the upper echelons of the NHL but they're both in the playoff picture. As we're getting late into the season getting two points from every game we can is a necessity and against the team one spot ahead of them in the West - Phoenix is currently in 6th place to the Avs' 7th - a win at home is vital tonight.

Peter Budaj will start again tonight according to Dater, another in the string of starts he's received since Craig Anderson started playing lackluster. He should have an easy time tonight against a Phoenix team that played in Edmonton last night. It's pretty obvious that Peter Forsberg - remember him!? - won't get out of his recliner and provide his incredibly old services tonight, but we have to mention that anyway because his comeback attempt is the only thing the national media knows about the Avs right now.

Fortunately, Wayne Gretzky has nothing to do with the Coyotes any more because today is his 50th birthday and we all know how much the Avs love helping opposing teams celebrate that sort of thing. Wojtek Wolski is also not there to score game winning goals against his former team any more so this should be considerably less painful than some other Phoenix games since that trade had taken place, right?