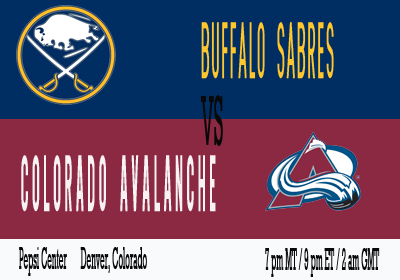 The Avalanche will once again try to get their season back on track tonight, as they welcome the Buffalo Sabres to the Pepsi Center. The Sabres stumbled out of the gate this year, slumping to a 3-9-2 start. Since then, though, Buffalo has gone 13-9-2 and is coming off a big 7-6 shootout win against the Bruins on New Year's Day.

In other words, Buffalo won't be a pushover tonight. If the Avalanche want to shake off this recent slump, they will have to do it with hard work and, perhaps, some voodoo magic. Or lots of goals. And the Avs might want to watch out for a couple of former Avs who are enjoying success in Emerson Eten's favorite town. Both Jordan Leopold (9 goals, 21 points) and Cody McCormick (9 points, 93 penalty minutes) are well on their way to career years for Buffalo and I'm happy to see that. I would prefer them to take tonight off and not go all Brad Richardson on us.

The Sabres will be without their leading scorer, Derek Roy, who is out for the season with a torn tendon in his arm. Roy was the 32nd pick in the 2001 draft, 31 picks ahead of the Avs' starting goalie tonight, Peter Budaj.

For those with the option to pick their TV feed tonight, do yourselves a favor and go with the Buffalo feed. The Altidudes are great, but there is no one quite like Sabre's play by play by Rick Jeanneret. [EDIT: Looks like Jeanneret is on vacation. Woe is me]

Die By The Blade