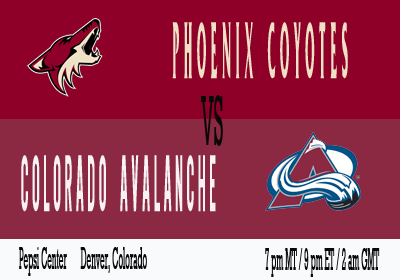 The Avalanche host the Phoenix Coyotes tonight at the Pepsi Center in a game that marks the halfway point of the season for the Avs. Depending on how the team fares tonight, the Avs will be on pace for either a 94, 96 or 98 point season when the dust settles. No matter what, that's not bad. I'd prefer the 98-point pace, though. Wouldn't you?

When I think of the Avalanche and Coyotes, one of the first thing that comes to mind is the trades. The teams have made some fairly big trades over the years. The biggest on came at the deadline in 2004, when Avalanche GM traded defensemen Derek Morris and Keith Ballard to the Coyotes for Ossi Vaananen, Chris Gratton and a 2nd round draft pick. That has to rank as one of Lacroix's worst trades (I still shudder when I picture Vaananen and his spindly legs). And yet, it also turned into one of the franchise's greatest moves, as that 2nd round draft pick became Paul Stastny. Still, the Avs could have taken Stastny instead of Ryan Stoa in 2005 and we wouldn't have had to bitch and moan about this one for 6 years and counting.

More recently, the Avalanche and Coyotes hooked up at the last trade deadline with Wojtek Wolski going to Phoenix in exchange for Peter Mueller and Kevin Porter. Mueller and Wolski both kicked ass after the trade last year, combining for 38 points in 33 games. This year, not so much. Mueller hasn't played at all, while Wolski has just 16 points in 34 games and has been a healthy scratch on a couple of occasions. Meanwhile, Kevin Porter has more goals than Wolski does, so this is clearly a win for the Avalanche.

Maybe. I haven't watched the Coyotes at all this year, but I have to point out that Wolski is averaging just 15 minutes per game and lately has been playing far less than that (8:59 in his last game). We can have a long chicken vs egg argument, but I do think you can argue that Wolski's numbers are affected by his playing time (or lack of it). Now, I know Phoenix coach Dave Tippett was the coach of the year last year and all (snark intended), but I wonder if there are any other examples of him misusing one of his players. Oh wait, I just thought of one! That Peter Mueller guy was languishing in Tippett's doghouse, averaging less than 13 minutes a game. Amazingly, he had a great deal of success when he came to Colorado and started getting quality ice time. I'm certainly not here to defend Wolski (the Week of Wolski at MHH is long since over). I'm just saying that the fact that he may just be getting a bit of a bum rap from that Adam's Trophy winning coach. Man, I wish we could find a great coach like that.

Finally, we have Daniel Winnik. Winnik was acquired from the Coyotes in June for a 4th round pick, and he has been 100% win since the first game played with us. For kicks, I thought I'd look back at the Avs' 4th round picks in recent years. And not-so-recent years. Going back to 1998, a grand total of two players the Avalanche drafted in the 4th round have played in the NHL: Ray Macias and Tom Gilbert. The rest of the field is littered with names I've never even heard of. Colt King? Mikko Kalteva? David Svragovsky? Are there any other awesome players we can get for any of those guys? Besides Ossi Vaananen, of course.