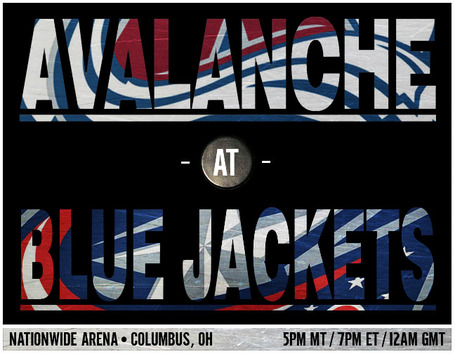 The story in the Columbus Blue Jackets' locker room right now is an all too familiar one to Avalanche fans: play a full 60 minutes. Coming off their third loss in as many games, the Blue Jackets are looking to turn the tide of a season that's starting out far more dismal than they'd hoped. In fact, this is the worst start to a season in franchise history for Columbus. None of the games were blow outs, and Columbus played some good hockey. They're netting goals and have three players who have posted three points each (Vinny Prospal, Rick Nash and Jeff Carter). It just hasn't been enough at the final buzzer.

What does all this mean to Colorado? The Avs have to be ready from the first puck drop. They're facing a hungry club tonight, one that is determined to show they are better than their record indicates. That's something else that sounds familiar around these parts. The key to the game for the Avalanche, though, is to score some freaking goals. Put the biscuit in the basket. Find the back of the net. Hit the twine. Pick your cheezy hockey catch phrase. Just score, boys.

Of course, since none of us will get to see the game, Gabriel Landeskog is bound to get his first NHL goal, and Chuck Kobasew is set for a hat trick. Tonight's game is the only one this season that will not be televised anywhere. The only folks who get to watch it will be the ones with butts in the seats at Nationwide Arena. Now, before you go ranting at Altitude about this one, remember that the NHL has a contract with NBC, one that says some crap about how no one else can televise games that coincide with their Game of the Week.* You can, however, listen to Marc Moser call the game on Altitude Radio via the Cruisin Oldies station. In case the Oldies link isn't working, try the official NHL link (stick tap to earl for the suggestion).

UPDATE: Per the Avalanche Twitter feed, the game will be televised on NHL Center Ice and Game Center Live with the blackout lifted in Colorado. It will only be the jumbotron feed - which most likely means no sound and not the best of video - but it's better than nothing. Listen to the always awesome Mose and watch the jumbotron? Yes, please.

The Denver Post is reporting that Semyon Varlamov will be in net for his third straight start. Changes to offensive lines and defensive pairings are not expected, either.

*This rule only pertains to the US market. Peeps in Canada will still see games featuring Canadian teams, even if they're on at the same time as the precious Game of the Week - or even played in the US. Doncha just love legal contracts?