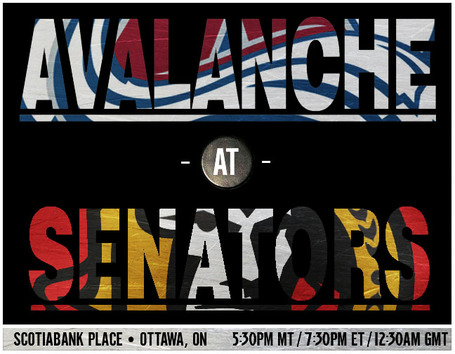 The Avalanche take on the Senators tonight in Ottawa in a game that has obvious significance for one reason and one reason only: no obnoxious jumbotron feed. Wait, no, that's not it. Oh yeah...it's because of that Craig Anderson guy.

The May-December romance between Avalanche fans and Anderson makes this a compelling matchup. Throw in the body language, the contract talks, the deleted twitter allegations, the amazing turnaround, the fact that we could only get Brian freaking Elliott for him in a trade...and it becomes borderline soap operaish. If hockey was a sport that ESPN cared about, you'd probably have all sorts of hype on SportsCenter today. We'd probably hear that Anderson has only faced the Avs once in his career, in his 2nd career start back in 2003.  Or that Anderson's first career start a few months earlier was against Jean-Sebastien Giguere. But ESPN doesn't care about hockey and no one who cares about hockey watches ESPN to begin with.

So, we get a mercifully low-key matchup with two teams struggling to find their way. Ottawa has had difficulty keeping pucks out of the net and Colorado has had a tough time putting pucks into the net (3 goals, all at even strength). The Avs, of course, are coming off a dramatic 3-2 shootout win thanks to a late-game tying goal by Gabriel Landeskog turning a demoralizing defeat into a big victory. Hopefully they can build on that...and start putting some pucks in the gosh darn net.