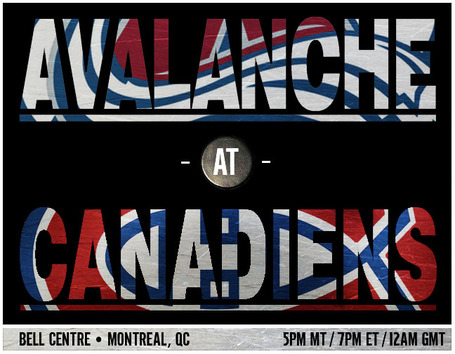 The Colorado Avalanche are in the great city of Moan Rhee All tonight to take on the Canadiens. The Avalanche are trying to win their first four road games for the first time since October, 1985, which they did with a win over...the Montreal Canadiens. How long ago was that? It was Patrick Roy's rookie year. Claude Lemieux was a 20-year old with the Canadiens, and Chris Chelios was just 24. For the Nordiques, Peter Stastny was 29 years old; his son, Paul, would be born about 6 weeks after that game.

The Avalanche could not have looked any better than they did on Thursday night (although the Senators did not put up much of a fight). Hopefully, the boys in burgundy keep up the same hard work that led to the 7-1 victory in Ottawa. Hopefully, we'll here more on Peter Mueller today. But we are talking about the Avalanche here, so I wouldn't hold my breath there.

The Canadiens are a very banged up team. Michael Camalleri, Chris Campoli, Andrei Markov, Ryan White and Jaroslav Spacek are all out. The thinking is that Peter Budaj will probably not get the start tonight, but that hasn't been announced yet (I'm assuming; I'm far too lazy to look)