Share All sharing options for: Blackhawks vs Avalanche Preview 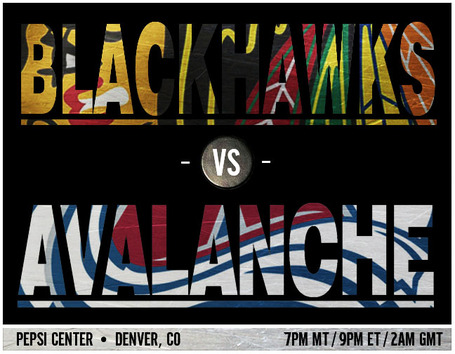 The Avalanche return to the friendly confines of the Pepsi Center tonight to face Joel Quenneville and the Chicago Blackhawks. The Avs are trying to do something they haven't done enough of going back to the final days of the tank run: win at home. The burgundy boys are 2-12-1 in their last 15 home games, with the "2" coming against Columbus and Edmonton.

Of course, it's a brand new year. Even though it kind of looks like we've been down this road before. The Avs started 10-1-2 two years ago (thanks in part to 4 straight road wins against teams like Boston, Montreal and Toronto). It wasn't quite as hot a start last year, but the team was still 12-7-1 on November 20th. The next game, Craig Anderson tweaked his groin again and two games after that, Chris Stewart broke his hand on Kyle Brodziak's head. Wheels, bus, season, over.

I guess what I'm saying is that I'm definitely enjoying the play of the Avalanche to the start of this season...but I also am aware that a LOT can happen, like a rash of injuries...or trading half of the roster...or having a goalie lose his mojo...or, perhaps, all of the above.

It amazes me all the "pundits" who are marveling at the Avs strong play. Pierre Maguire was astonished the other night in Toronto, certain that he'd never seen the Avalanche move the puck up the ice like they were doing against Tyler Bozak and company. Which is great, except that we have. The Avs uptempo offense has been there at the start of every season since Joe Sacco replaced Tony Granato and his non-uptempo uptempo offense. Pinching defensemen, speed in the neutral zone, long passes out of the zone...nothing all that new. Unfortunately, we've seen teams adjust to this, clogging up the zone and/or using quick counter attacks to get behind our aggressive d-men.

In the past two years, the story has been the same: fast start, shit happens, scoring drops, goals against rise and the Avs start to fade after Christmas. Hopefully, the ending will be a little happier this year (although the lack of organizational depth at some key positions has me a little worried).

And so concludes the most depressing preview written about a 5-1 team in the history of the world. I hope you enjoyed it. Go Avs!