Share All sharing options for: Avalanche at Flames, Game 9 Preview 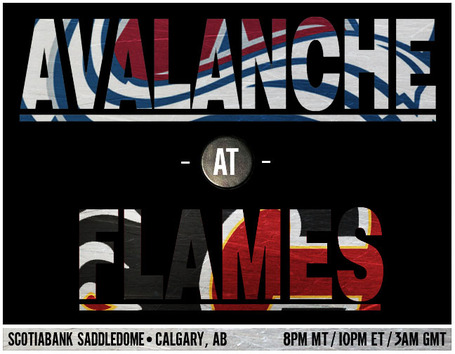 The Avalanche take on the Calgary Flames tonight in the first Northwest division battle of the young season for the Burgundy & Blue. The Avalanche are undefeated on the road (wood knocked), while the Flames are just 1-2-1 at home and rest at the bottom of the division with a 2-4-1 record. Beware of bottomfeeders though as the Flames always play with energy at the Saddledome, fueled by their raucous home crowd (who are in turn fueled by Canadian moonshine).

Also of note tonight, being that this is the 9th game of the season, it is the final game for the Avs' brass to decide whether or not to keep rookie Gabriel Landeskog around or send him back to the minors..... yeah, we think that decision has been made for them.

Let's hope the game goes over 60 minutes as the Avalanche are a gorgeous 4-0 in games decided after one hour of playing time. In normal 60 minute matches, the mile high guys are a pedestrian 2-2. Both teams have enjoyed a few days off, and Sacco is placing a lot of emphasis on winning division games this season, so expect to see a rested and ready Avalanche squad tonight on the weirdly dark telecast from Alberta (seriously, white balance and expose properly Alberta, it's 2011). Go Avs.