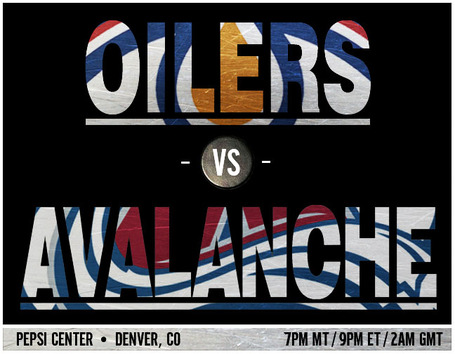 Tonight's match up brings with it an array of storylines that will keep McNabb and Haynes chatting through their salivating all night long. The featured attraction is the battle between a pair of 18 year-old rookie sensations who have taken the NHL by storm (or at least a drizzle) this young season. Last year's #1 & #2 draft selections will square off in Denver as Ryan Nugent-Hopkins and his surprising 5-2-2 Oilers cruise in to Denver to take on Gabriel Landeskog and the 0-2 at home Avalanche. It was thought by many that RNH woud not stick in the NHL this season. His skill level is obviously there, but he is still a boy measuring in at a decent 6'1", but weighing in at a slight 175lbs. But the #1 draft pick's stat line: 5G 4A 9PTS and +3 rating (and a hat trick in just his third NHL game) have been enough for the minds in Edmonton to roll the dice and bring the skinny fella to Denver. If he plays, it'll be his 10th game and he's an NHLer for realz.

On the other side of the ice, Gabriel Landeskog has been everything Avalanche fans hoped for and more. He's strong, sound, and always seemingly makes the right play from the right spot. He plays with a maturity beyond his years, he plays like a man. Landy has also racked up some important points and plays crucial minutes in all situations for the Avs. He's third in rookie scoring with 4G, 2A for 6PTS and is a +2. He also leads all rookie forwards in time on ice. He also leads the Avs in shots and is second on the team with 23 hits, behind Cody McLeod's 26.

Landeskog and Ryan Newton-John-Hopkins will draw comparisons to each other for the next few years, if not their entire careers, and one of these two young'uns will probably walk away with the Calder trophy in June, but both are talented kids enjoying successful rookie seasons living out their childhood dreams. Let's hope RNH's dream turns into a nightmare tonight as the Avalanche take down their division foes.

Several other storylines to keep an eye on tonight when the puck drops: