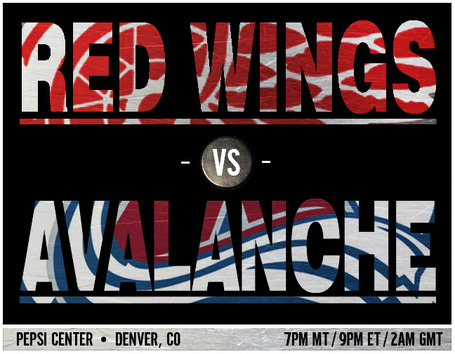 ** Huge thanks to Andi for the beautiful preview graphics! **

The Colorado Avalanche kick off their 2011-2012 Stanley Cup run tonight in Denver. Along the way, the Avs will no doubt dominate every step of the way, but it is best not to get too cocky. It's important to approach this 82-0 season one game at a time.

The first victim to be trampled by the yeti will be the Detroit Red Wings presented by Amway. The Red Wings that take the ice tonight at the Pepsi Center will be familiar to most. Nicklas Lidstrom sponsored by Energizer continues to lead the team on the blueline, while Pavel Datsyuk and Abel to Yzerman's Henrik Zetterberg will once again be a potent offensive force. And yes, [name redacted] sponsored by Massengil is still drawing a paycheck to coast lazily around the ice.

Once the Bridgestone Tire puck drops onto the Flavor Ice ice on the Pepsi Center floor, we'll get our first real look at the new Monster.com Avalanche defense and our new Icy Hot goalie, Semyon Varlamov. Up front, expectations are high for Absolut Matt Duchene and Colgate Paul Stastny. Duchene is expected to center a line with Milan Hejduk presented by Aflac and Excederin PM, returning from a lost season. Stastny has been skating lately with Dr Shoals Jones and Chuck E Cheese Kobasew. Meanwhile, rookie Gabriel Landeskog presented by the Paramount Pictures movie Thor (own it on DVD today!) will make his Geico NHL debut tonight. And...scene.

Coming back into serious land, tonight is a big night for more than the game. Before the game, the Avalanche will retire the #21 jersey of the great Peter Forsberg. Foppa will be immortalized for his incredible skill and dynamic play, joining Ray Bourque, Patrick Roy and Joe Sakic in the rafters. The team will also honor 3 Avs that were lost this summer - Wade Belak, Ruslan Salei and Karlis Skrastins. The on ice ceremony begins at 5:45 MT (I believe it will be carried by Altitude for those who can't make it). For those who will be attending, there will be a MHH / Avalanche Guild / Burgundy Brigade meet-up at Brooklyn's before the game.

It's good to have hockey back. Go Avs!

PS We're doing the game thread pic thing again this year, so post your awesome submissions in the comments