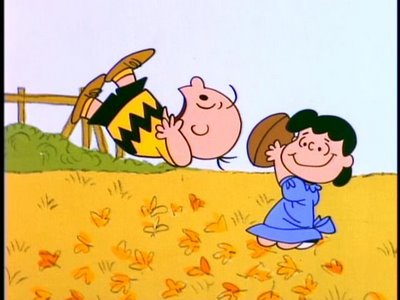 Really, the picture above sums it up better than I can. The Avalanche absolutely pulled a Lucy on us tonight. For a while, they looked like they were going to deliver a huge win. And then....AAAAAAAUGH.

The Avalanche came out a little tentative (stop me if you've heard this one before) but picked up steam fairly quickly. I think a lot had to do with Cody McLeod taking on Aaron Asham after Asham's hard hit on Jan Hejda. Then, the Avalanche killed off a big 5 on 3 and the tide really started to turn Colorado's way. Jay McClement - coming off of two straight healthy scratches - scored the first goal at 14:51 banging home a rebound from Milan Hejduk. Cameras later captured Hejduk giving McClement a little captainly pat on the back.

Duchene was next up with a highlight reel goal. Kyle Quincey started the play off by dropping the puck in the corner. Paul Stastny outhustled Kris Letang and muscled him off the puck before dishing to Matt Duchene in the slot. Duchene appeared lined up to shoot, but instead moved the puck between his legs to the backhand. Sick goal. Duchene was back at left wing tonight and appears to LOVE it. I know it's just 3 games at wing...but I'd keep him there as long as he plays like he did tonight. #lonebrightspot

Jordan Staal scored kind of a soft-looking goal to cut the lead to 2-1, but the Avalanche got it back with 20 seconds left in the period when David Jones and McClement rushed up late and Jones fired a sick shot past Marc-Andre Fleury.

The period started with Duchene forcing a turnover early giving Hejduk a wide open net, but it ended up ringing off the post. I felt this was a key point in the game. If that goes in, the Avs are up 4-1 and rolling. Instead, it's 3-1 and the Penguins could make it a 1-goal game by scoring the next goal.

The Penguins scored the next goal. (You knew that would happen, right?). It was a fluky one - Semyon Varlamov pounced on a loose puck outside of his crease but couldn't quite reel it in. The Penguins charged hard and Pascal Dupuis ended up banging the loose puck home. Up until this point, the Avalanche were completely controlling the play and the Penguins appeared ready to check out. This goal, coming at the 11:01 mark, totally revitalized the Penguins and the home crowd. There'd be no more scoring in the period...but, the deluge was coming.

The 3rd was a disaster - one of the worst if not the worst periods of the season for the Avs. Really, all the damage was done in the first 10 minutes or so (3 penalties, 4 goals allowed). The onslaught began just over a minute in when Brooks Orpik's point shot deflected off of McClement's skate, perfectly changing direction to beat Varlamov. Tough luck for both  McClement (who had a good game otherwise) and Varlamov (who didn't).

Three minutes later, the Penguins took the lead on an absolutely ridiculous goal by Evgeni Malkin. Malkin first pushed Quincey off the puck behind the net. He dished to James Neal, Neal cycled back to Malkin. Gabriel Landeskog moves to put the body on Malkin. Malkin dekes the pants off of Landy and Varlamov to make the game 4-3. It was an amazing effort by Malkin and a beauty of a goal to watch, albeit a painful one.

The Avalanche were done after this. T.J. Galiardi took a penalty and no one on the PK covered the dangerous James Neal on the PP. Good plan. Right after Neal scored, O'Byrne was called for roughing after running at Matt Cooke (or so it was described...Vs didn't bother with the replay). The Avs killed that one off and then promptly allowed Kris Letang to get a head of steam on Varlamov. Any comeback dreams ended with that softy. Body language fans will be interested to hear that Varly had his head drooped down dejectedly as he played the puck later in the game.

It would be easy to say that instead of waiting for the 3rd period to start playing, the Avalanche instead played early and then quit early. But I don't think that's fair, to be honest. I really think this game just got away from them. They had some chances early to essentially put the game out of reach but couldn't quite seal the deal. Instead, they left the door open for a very strong Pittsburgh team to crawl back into it and, all of a sudden, the football was snatched out of reach. No matter how it happened, though, it's a demoralizing loss and anyone who isn't a little worried about Varlamov's frame of mind right now just hasn't been watching. Good grief.

MHH Avalanche 3 Stars of the Night

Porter and Hunwick were the healthy scratches tonight. Peter Mueller was placed on the IR yesterday; this move is retroactive to October 20th so he can be activated any time. It likely isn't an indicator of his health (or lack thereof) but more that Brandon Yip is expected to return soon.

The Avalanche are in Minnesota on Thursday