Share All sharing options for: Avalanche at Wild, Game 19 Preview 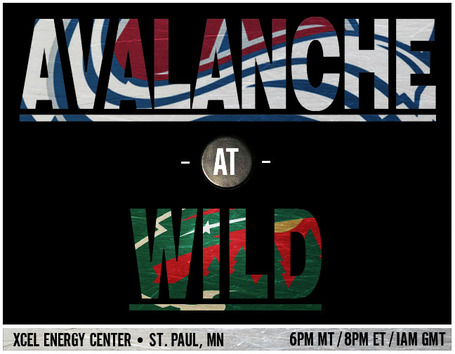 Tonight the Avalanche will be in Minnesota to take on the Wild for the first time this season. I will be looking for the team to make some amends for the lackluster effort during the second half of the game against the Penguins on Tuesday night.

Last year the Wild were able to take four out of the six games against our boys in Burgundy and Blue and will looking to continue their stellar play and challenge the Dallas Stars for the lead atop Western Conference standings, they currently sit in 2nd place, just 4 points behind the Stars. By the way, if you would've told me that it was going to be the Minnesota Wild that would be leading the Northwest Division this far into the season, I would've told you not a chance. However, there they sit ahead of the defending President's Trophy winning Vancouver Canucks and the young upstart team in Edmonton.

For the Wild, they are starting an extended home stand where they will be looking to substantially increase their lead in the Northwest Division. During their last game Tuesday night against the lowly Blue Jackets, they came back from 2 goals down to win 4-2. Sounds like another game that was played on Tuesday night.

For our beloved Avalanche the road games were our specialty during the month of October. Since the calendar turned to November, yeah not so much. As a matter of fact, the Avs are having a hard time winning no matter where the game is being played. During the month of November the team is just 1-5-1 so far. I've got to think that if this play keeps up Joe Sacco's days have got to be numbered. Anyone have Bob Hartley's number?

Right now it's the same old story for the Avs on the injury front. Peter Mueller is still trying to shake concussion symptoms that have been bugging him for way longer than I would care to think about. Brandon Yip is still out with a broken forearm. The WIld will not have the services of Marek Zidlecky, Marco Scandella, Guillaume Latendresse, Mike Lundin, or  Greg Zanon.

The Avs power play is still currently ranked number 1 in the NHL despite going 0 for 2 on the power play on Tuesday in Pittsburgh and the penalty kill ranks 27th with only a 76.2% kill rate. Thankfully though the Minnesota Wild's power play is ranked 25th, only converting on 12.7% of their chances. I still would like to keep any power play with perennial Avs killers Dany Heatly and Devon Setoguchi off the ice as much as possible. Their PK is just about in the middle of the NHL (17th) killing off 82.6% of the power plays they face.

I will be looking for the Avs to make a strong statement in this game and recover from their collapse against the Crosby-less Penguins. If not, the seat Joe Sacco sits on is only going to get hotter.

How do you feel about this game, please share your thoughts in the comments below.