Share All sharing options for: Sharks at Avalanche, Game 21 Preview 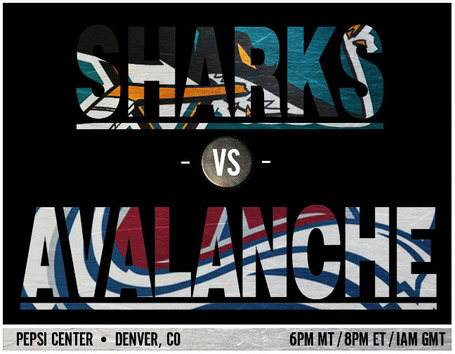 We, your fans, want to thank you for the inspiring win on Friday night against the Dallas Stars. It would be fantastic if you could do that again tonight when you face those horrible Sharks from San Jose. Do you remember April 2010, the first round of the Stanley Cup playoffs? Do you remember the terrible things these very same Sharks did, all those cheap shots and douche maneuvers? It's high time you showed them that you aren't going to take it from them anymore!

Now, they may be higher in the standings, but so are Dallas, Los Angeles and Chicago. And what did you do to them? You schooled them with your slick moves, you pounded them into the boards, you outworked them, damn it! You've done it before; you can do it again. You have better face off numbers than they do. You have a better power play than they do. You even have a better penalty kill! This. Is. Doable.

We realize the last couple of weeks have been a little harsh for you. To be completely honest, it's been harsh for us, too. There have been a few games where it seemed like not everyone was fully invested. Some lackluster play led to some bad losses. Even worse, all of these poor showings at home have really hurt us. But we still believe in you. A lot of those games you really should have won, but that darn Corsi fellow kept getting in the way. On Friday, the bounces favored you. You also were playing your game. We like that! It's so much more fun to watch games when you play like we know you can, not to mention the fact that you're more likely to win that way.

As Sam Quint once said, "I'm not talkin' 'bout pleasure boatin' or day sailin'. . . I'm talkin' 'bout sharkin'!" You are sharkin' tonight, boys. Please don't forget that. After all, Mueller and his scrambled head are counting on you to exact some revenge. You've got the muscle; you've got the skill. Now go out there and don't stop attacking until you've made chum of those fish!