Special Gameday Thread: Sid the Kid is Back in Black

Share All sharing options for: Special Gameday Thread: Sid the Kid is Back in Black 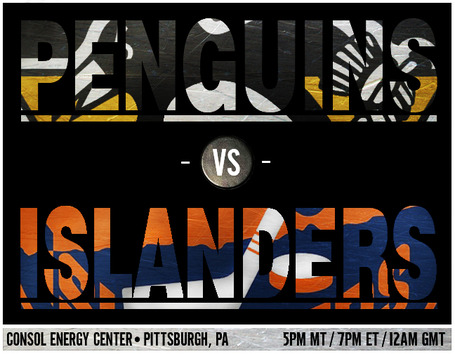 That's right.  Sidney Crosby is back.  Love him or hate him, he is the best player in the world and a downright treat to watch.  And hey, at least we don't have to hear Reporter: "Sid, how's the head?"  Crosby: "It's the same as the last time you asked me three minutes ago." anymore.  Now that "Crosby Watch" is over, we can all finally watch Crosby.  And that's certainly something to be thankful for.

The game tonight WILL be broadcast on Versus.  It was supposed to be the Boston-Montreal penaltyfest, and the hockey world does love their rivalry games.  But they love Sidney more, so VS made the last minute change to the Pens/Isles game.  Because of this love, I figured I wouldn't be the only one watching tonight, hence the reason for this thread.  Just think of it like a playoff game - it's one you watch because you're a fan of the sport, not because you're a fan of one of the teams.

The game tonight is probably going to be a bloodbath though.  Not only are the Pens getting a talent boost by getting a player that even at half-speed is still All-Star worthy, they're also getting the emotional boost of getting their Captain back.  And it's not like they've been tanking without him - they're barely second in their division.  If they win tonight, they take over the lead in the Eastern Conference.

The Isles are sitting on the exact opposite end of the spectrum.  They're dead last in the East and chilling out at #29th overall (and you remember how that goes).  They have 2 goalies on IR, and the only healthy one is DiPietro, so who knows how long that will last.  They've managed to drop 11 of their last 13 if I'm remembering correctly, so things aren't going so hot for them right now.  If they manage to make this a real game, I'll be very surprised.

So, good luck Isles (you're going to need it), and welcome back, Sid!