Share All sharing options for: Canucks at Avalanche, Game 22 Preview 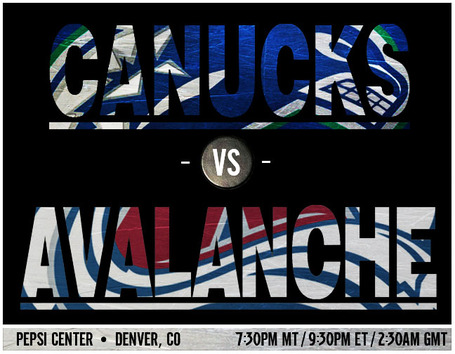 Tonight's match up brings with it an air of "wtf". The Avs have no definitive identity, a new captain, have won just 3 of their last 13, and have struggled to string together a solid 60 minute effort. Meanwhile, the Canucks, last season's President Trophy winners, Western Conference Champs, and Stanley Cup runners up, sit 11th in the West, just 2 points ahead of the unstable Avalanche, yet deny suffering from any post season hangover despite their struggles.
The Avs are 1-1 on this current 8-game homestand and will need the hot play of Matt Duchene
(7 goals, 3 assists in the last 9 games) to spread like wildfire to his teammates if the Avs want to turn things around and send us all off on a happy Thanksgiving. Varlamov will be back between the pipes for the Avs after being displaced the past 3 games by Giguere, and the Canucks will get Roberto Luongo back after missing some time with an upper-body injury, but there's a chance back up Cory Schneider will start so the Canucks ease Lou back to work.

Who are these teams? Where are they going? Where will they end up? What does Sacco's future hold? Why do the Sedin twins eat a chipmunk fetus and drink whale blood before every game? Tonight's game is an opportunity for two troubled clubs to try to answer these questions and right the ship in an effort to establish their identity and carve out a presence in the Division and in the Conference. Let's hope Monday's bag skate motivates the burgundy and blue into the 'W' column. Update: Peter Mueller practiced yesterday. How's that for a 'welcome back': go skate blueline to blueline line as hard as you can over and over, thanks. Mueller still has no timetable for a return.
If you're a true masochist, check out the official Avalanche preview, full of optimistic stats like this promising little gem: 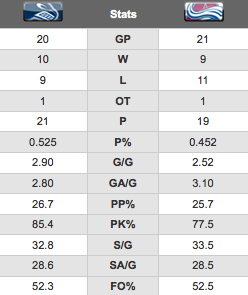