Share All sharing options for: Game 23 Preview: Oilers at Avalanche 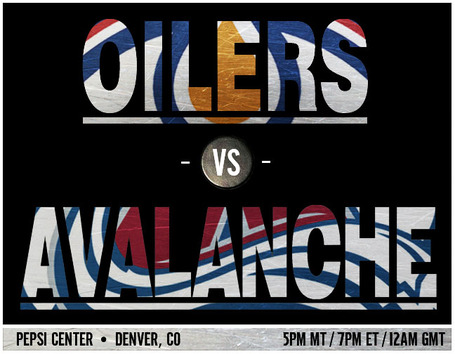 Oh bother. The Avalanche are in action again tonight, and yes it's a darn shame that I almost put the word action in quotes. It is kind of hard to love this team right now. They've played 22 games. 11 times - half - they've scored 2 goals or less. 14 times they've allowed 3 goals or more. I'd love to spin some happy tail here, but it boils down to a very basic premise: the Avs aren't getting it done.

After a hot start - with a 6-game winning streak that included beating the Avs 3-1 - the Oilers had cooled off lately. But, they've won 2 of their last 3 and scored 15 goals in those two wins, so Colorado will need to play a solid game tonight to have a chance. Edmonton has a lot of weapons. Matt Duchene leads the Avs with 16 points. The Oilers have 4 players - all former 1st round picks - with more. Former Av Ryan Smyth and 2011 1st overall pick Ryan Nugent-Hopkins have 22 points (RNH has 7 assists in the last 3 games). Jordan Eberle has 21 and Taylor Hall has 16.