Share All sharing options for: Avalanche at Stars, Game 13 Preview 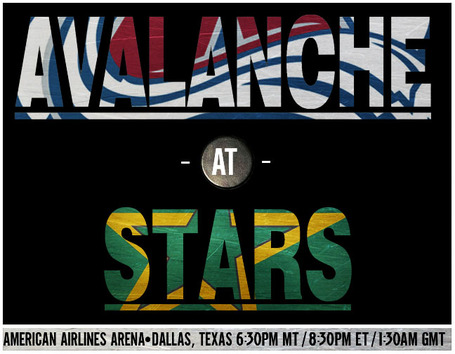 Fresh off a loss in which the Avalanche managed just one lonely goal against a hot goaltender, the Avs waltz into Dallas tonight to take on the Stars and the alien Kari Lehtonen who is finally healthy and living up to his hype and high draft status. He's sporting a 1.75 GAA (4th best in NHL), a .947 save% (2nd in NHL), and a league leading 8 wins. It's the 4th time in 4 games that the Avs have run into a hot goalie. Khabibulin in Edmonton is 1st overall in save% and GAA, Quick had just broke a franchise record while posting three consecutive shut outs, and Mike Smith is currently riding the hottest streak of his career.  (ooopsy: As BrianD so tactfully pointed out, we actually didn't face the Bulin wall, we faced his back up Devan Dubnyk, who only has a wussy 1.98 GAA and .938 save %. What a sieve.)

The good news is, the Avs have dominated on the road so tonight has the potential to net better results.The Avs lead the league in Goals on the road with 24, but sit at the bottom of the league for Goals at home with a pathetic 6. Which helps explain why your Avs are 6-1 on the road and 1-4 at home. After Wednesday night's impotent showing against Phoenix, the Avs also dropped from first place to second on the PP, and 3rd in faceoffs. Not that we're complaining. We'll take those numbers any day of any season.

"Corsi is dumb" stat of the day: Dallas is 6-1 in games they've been outshot and sit at the bottom of the league in shots per game, yet they're 8-3 on the season. Where you at Corsi?