Share All sharing options for: Sharks at Avalanche, Game 31 Preview 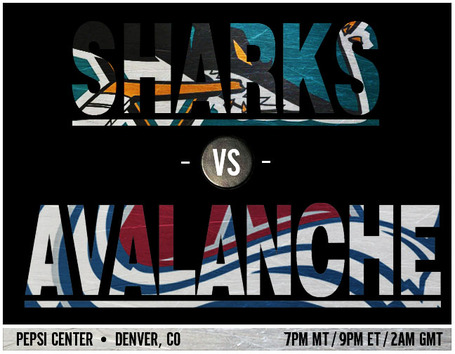 The Colorado Avalanche and San Jose Sharks face off tonight at Pepsi Center to kick off a home-and-home series. The Sharks and Avs have met once this season, with San Jose taking a 4-1 decision back on November 20th. Patrick Marleau netted the hat trick on an empty netter in that forgettable match up. Matt Duchene scored the Avs' lone goal and Giguere took the loss.

An all too familiar theme crept up in that game: Colorado's inability to stay out of the box. The Avs had 1 powerplay chance to the Shark's 7 opportunities with the man advantage. This affinity for the penalty box is beginning to become a cause for concern (for me anyways). During the Avs 3-0 win streak, they amassed a controlled 31 PIMs. During the current 3-game losing skid, Team Blueberry has piled up 68 PIMs. To be fair, 42 of those PIMs came in the Canucks debacle, but still, there is a pattern here. The only game of the past six, where the more penalized team came out on top was the Red Wings game where the Avs had 10 PIMs to Detroits' 6 PIMs. During the current losing streak, the Avs have allowed 5 PP goals: 1 against Vancouver, 2 against Calgary, and 2 against Edmonton, while netting 0 PP tallies.

We all love seeing McClement, Winnik, and Galiardi surprise team's with their aggressive PK, but we'd rather see O'Brien, O'Byrne, Quincey, et al, play with a tad more discipline and not have to take penalties as opposed to playing solid defense. All in all, this isn't the Avs biggest problem, but it's a problem.

Here's some stats for the math fans among us: