Share All sharing options for: Capitals at Avalanche, Game 33 Preview 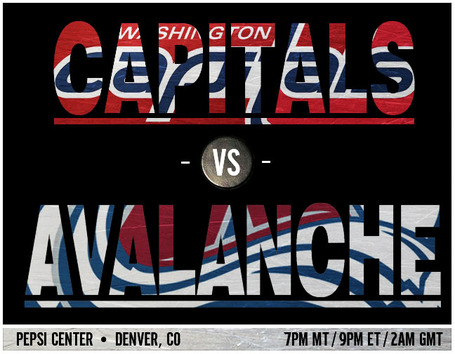 The Avalanche and Capitals are in action tonight at the Pepsi Center. On the surface, neither team has much in common, but the ace team of MHH statisticians have found some amazing similarities between the two teams. If you dare, read on...and be AMAZED.

Bruce Boudreau was replaced by Dale Hunter. Hunter was once traded by the Nordiques for the draft pick that was used to take Joe Sakic. And Joe Sakic would later play for the Avalanche. In fact, he remains employed by the franchise to this very day. Shocking but true.

And Joe Sacco once played for the Washington Capitals. Woah! Shocking but true.

Both teams, of course, will play in this year's Winter Classic, the NHL's annual show to highlight a team from the east and the west. Oh wait...sorry, this one's not true. This one's just for the teams in the east. Shocking, but true.

Although both franchises date back to the mid-70s, neither team has had a player named Kennedy or Lincoln. Shocking but true.

The Avalanche logo is a capital A. Shocking but true.

Both teams are exactly 8-5-1 when scoring first. Shocking but true

Matt Hendricks once played for the Colorado Avalanche, but was let go for monetary reasons. Shocking but true.

Not many people know this, but this summer the Avalanche and Capitals were involved in a trade, with the Avalanche getting Semyon Varlamov. The Avalanche are laughing all the way to the bank, because their 3.09 GAA is a full one hundredth of a point better than the Capitals. Ha ha ha! Enjoy your lottery pick, suckers!

I know these facts are incredibly eerie and wholly unnatural. But facts are facts. Go Avs