Share All sharing options for: Flyers at Avalanche, Game 34 Preview 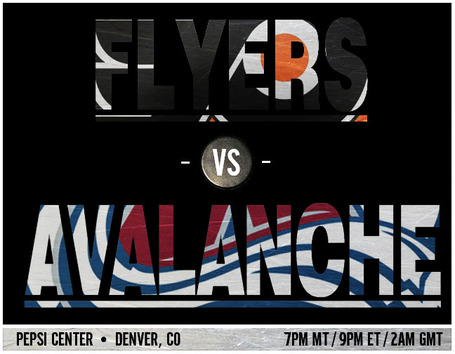 After dispatching the Capitals on Saturday, the Avalanche have a giant opportunity tonight as they host the Eastern Conference's current top team (statistically speaking). Although they'll need some help, the Avs can pass as many as three teams (Calgary, Edmonton and Los Angeles) with a win tonight. The Avs won on Saturday by having Erik Johnson and Cody McLeod both break their 2011 goal cherry. Matt Hunwick and Brad Malone...looks like you guys are up.

Both teams are very banged up. You know about the injured Avs; the Phillies are in a similar boat, with Claude Giroux, Chris Pronger and Sean Couturier among the names on the injured list. Oh, and that Ian Lapperiere guy. We still miss you, Lappy.

On paper, this one doesn't look great from a goaltending standpoint. Both J.S. Giguere and Semyon Varlamov have their worst career GAA against the same team. Yep, the Flyers. Giguere is 2-6-2 with a 3.73 GAA all-time, while Varly is 0-0-1 with a 4.79 GAA. Oh, and the Flyers are the highest scoring team in the league right now. On the other side of the ice, Ilya Bryzgalov is 7-4-3 with a 2.43 GAA all-time vs the Avs. Thankfully, the game isn't played on paper. That's right, it's played on ice. Shocking, but true.