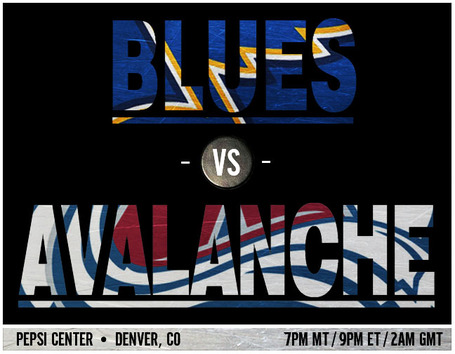 I've been kind of out of the loop 'Lanche-wise the last week or so - I just heard about Lindstrom getting waived - but a game against the Blues is just the thing to snap me out of my mini-funk. There are just so many angles here that I found interesting.

Of course, you can't talk about a Blues / Avalanche game without mentioning The Trade. Erik Johnson has been on the IR with a strained plus minus, but could possibly return to action tonight. He currently has 9 points (all helpers) and is -12 on the year, good for 728th best overall. Kevin Shattenkirk seems to be the Shattenkirk we knew all-too-briefly; he has 14 points and a +9 rating. Man, wish we could find players like that. On the flip side, Chris Stewart had 2 goals in his first 3 games and just 1 in the 18 games since. Hell, he has less points than Dan Winnik at the moment. I'd like to point and laugh...but I can't help but feel that that is a really bad omen for us. Oh, and as a minor aside, Ty Rattie - whom the Blues drafted with the Avs 2nd round pick - is tied for the WHL lead in goals right now with 27. Just sayin...

And, it has to be pointed out that the Blues are red hot. They've won 4 straight and are 8-1-2 since firing Davis Payne and replacing him with Ken Hitchcock. That can't sit well with the Sacco haters, but I am still on the Sacco bandwagon. I still don't believe the blame for the Avs' failure to date falls to Skipper Joe. I don't feel the Avs have enough star players...and I don't believe the Avs' star players are playing like star players. Some might put the coach on the hook for the latter, but I'm not one of them.

While neither team can score (18th and 21st in the league), the Blues at least can stop the puck ranking 1st in goals against average. That, of course, is because of the incredible first quarter from....wait, Brian Elliott? That Brian Elliott? The bag of pucks we got for Craig Anderson that went 2-8-1 with a 3.83 GAA for us? The guy who inspired the tank meme? You're telling me he's leading the league in GAA and save percentage? Can this be real?

It is. The question, though, is why do goalies seem to play worse for the Avs than they do with other clubs. Actually, that's not the question. The real question: is that perception factual? I decided to put it to the test. Thanks to my favorite resource, hockey-reference.com, I looked at the 8 goalies who have played for the Avs since Gary Bettman fucked us all over (aka, the lockout). I complied their stats with the Avs and their stats with the other teams they played for, either pre- or post-Avalanche. I only used post-lockout numbers (so 2005-2006 season and beyond).

How many think the numbers for the Avs will be noticeably worse? I did, or I wouldn't have bothered with the frigging thing. Of course, I was wrong.

In other words, the 8 goalies above had an aggregate save percentage of .903 while with the Avs and .906 with other teams. Technically, they've played a bit worse for the Avs, but in effect that difference is so close as to be nearly insignificant (we're talking about 8 goals over an average season). To me, these numbers are close enough to dispel any myth that our goaltending woes of late have been a function of coaching or lack of defensive system. It's just that we haven't had great goalies. I'm not sure if this makes me happy or sad, to be honest.

Oh, and as an aside, since I had the numbers I thought I'd look at the Avs goaltending stats during the 2 years the team had a full-time goalie coach compared to when they used part time goalie "consultants" (you know, to save money for the rebuild). I have no idea who the Avs' goalie coach was in 2005-2006, if they used one at all. No one was listed in the media guide and my memory sucks, so I tossed that year out. Jeff Hackett was a part time goalie coach in 2006-2007 before spending two years as a full-time coach. He was jettisoned in the house cleaning in 2009, replaced by Jocelyn Thibault on a part-time basis. A year later, Thibault gave way to Kirk McLean who is currently in season number two with the club. So, how do the two seasons with full-time Hackett compare to the years we had a part time coach?

If there's a huge statistical difference here, I'm not seeing it. I'm not the Avalanche shouldn't stop being cheap bastards fiscally conservative and hire a goaltending coach full time. I'm just saying I can't find a quantitative argument in the stats. Also, I used quantitative in sentence, which kind of makes me happy.

To sum it up, Erik Johnson is good but maybe not good enough to make me miss Kevin Shattenkirk and his freakishly bald head. I still don't want Kevin Hitchcock on my team. Brian Elliott isn't having a career revival because he got away from the Avalanche any more than Craig Anderson had a career year because of the defensive prowess of Scott Hannan and Brett Clark and none of this will matter one iota to me if the Avalanche would just win two freaking games in a row.

I'll now hand over the podium to the senator from Iowa. Thanks for listening.