Share All sharing options for: Lightning at Avalanche, Game 36 Preview 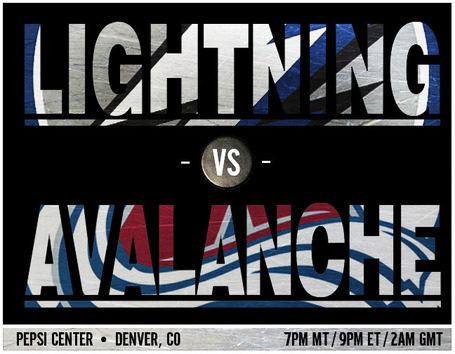 The Avalanche host the Lightning tonight and the Avs are trying to do something that no other Avalanche team has accomplished: win their 8th straight game at home. The franchise has seen two different 10-game streaks by the Nordiques (most recently in 1995), but the longest Avalanche streak is 7 home wins from January 23rd - February 25th 2003. The Avs haven't lost in Denver since falling 3-1 to Dallas on November 28th. Of course, they haven't won any road games in that stretch - not since October 22nd, actually - but the Avs have owned at home. Colorado is also trying to move above .500 for the first time since mid-November.

There's a number of compelling storylines to tonight's game. Former Avalanche Brett Clark returns to Denver with his +1 Amulet of Fan Polarity in tow. Fans were often down on Clark, but I always thought that was a bit unfair. He was better than folks gave him credit for, and some of the heat came from that last $3.5 million-per-year contract he signed with the Avs. It is worth pointing out, though, that Clark has 37 points since leaving the Avs two summers ago. Since then, only one defenseman has matched that in an Avalanche uniform...and he's currently playing for Toronto.

That's not it, though. Brad Malone will be facing off against his cousin, Ryan. Steve Moore's brother Dominic is a center for the Lightning and Tyson Barrie's dad used to own the darn team. And, of course, Tampa's decision to draft Victor Hedman with the #2 pick has worked out fairly well for the Avalanche. Meanwhile, they traded their 2nd round pick to Detroit to move into the 1st round and drafted Carter Ashton. Detroit used their pick on Landon Ferraro, dropping Ryan O'Reilly into Colorado's lap. So, uh, thanks for that.

J.S. Giguere will be making his 4th straight start tonight. He's 5-2-0 all-time against Tampa, but this is really about his recent play. Giguere has been very good, but I know there's been some chatter in the comment sections on this fine board that the Avalanche have been playing better in front him than they have for Semyon Varlamov. I thought I'd crunch some quick numbers to see if there was anything to that.

With the help of the always-valuable numbers at hockey-reference.com, I put together a little statistical comparison. The numbers below are the numbers for Varly and Giguere and the numbers for the opposing goalie in the same game. So, for example, in Varly's starts, he has faced 29.9 shots per game while the Avs have put 30.9 shots on the opposing goalie (as a shortcut, I did not include the stats for the 2 games where both Varly and Giguere appeared)

Lo and behold, the Avalanche are playing better offensively in front of Giguere...to the tune of almost one shot per 60 minutes. Yes, there was some sarcasm there. Really, that's a fairly small number and the differences between GAA and Save Percentage are pretty small too. Bottom line, the Avs don't appear to be generating significantly more offense (shots or goals) in front of either goalie. They spread their offensive ineptitude equally.

Defensively, there's a big swing. Varly has a much higher GAA, Save Percentage and, most interesting to me, he's facing 2 1/2 more shots per game. That last stat could be a smoking gun that the Avs aren't playing as well defensively in front of Varlamov. Then again, it could also mean that Varly is giving up more rebounds than Giguere, which would certainly jibe with my observations of his rebound control (*waves at Mike*).

In the end, the stats are largely inconclusive and highly debatable. It's clear that the Avs are giving up more goals with Varlamov between the pipes...but no one needed me to make a fancy table to tell them that. What's not clear is whether the difference is just the difference in play between Giguere and Varlamov (a gap that likely will close as the season goes on) or if the Avs are simply playing better defensively in front of Giguere. Personally, I'm inclined to say it's the former; the fact that the Avs offensive numbers are largely the same makes me suspect the Avs are playing a similar game regardless of the man between their pipes.