Share All sharing options for: Jets at Avalanche, Game 38 Preview 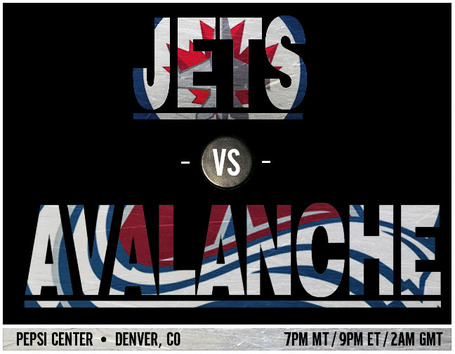 While yesterday's game versus the Wild was between two teams streaking in opposite directions, tonight's game featuring the Avalanche hosting the Winnipeg Jets in their only visit to Denver this year is between two teams who have largely spent the month of December in the comfortable confines of their home arenas.

Amazingly, the Jets have only played one road game this entire month, a 7-1 loss way back on December 10 in Detroit. They've notched a 7-2-1 record in the 10 home games they've already played (with 2 more still to come) and would appear to be playing some pretty darn sexy hockey. On the flip side, the Jets have just 3 wins in their previous 10 road games with their last two wins coming against the New York Islanders on November 3rd and the Carolina Hurricanes November 25th. To simplify, it took them playing the worst teams in the JV Conference to get two whole road wins in two months. Overall, the Jets are just 4-8-4 on the road and head to high altitude to play one of the hottest teams in the NHL.

These record-setting Avs head back to Denver where they go for a 9th consecutive win at home after outplaying the sinking Minnesota Wild last night to snap all sorts of ugly road numbers of their own. Back-to-backs are almost always a choose-your-own-adventure, especially with a very young hockey team so the decision to go with veteran netminder and noted cool customer J.S. Giguere in net tonight is indeed a wise one that any coach would've made so let's avoid giving Sacco any props for it.

I'm not sure who the Jets are going with tonight in net but if they go with starter Ondrej Pavelec, the Avs are likely in for a frustrating night. Pavs has been good for about one bad outing in every 5 starts and his most recent start, a 4-1 loss to the Penguins, was that baddie. In terms of scoring, the man picked immediately after Matt Duchene in the '09 Draft, Evander Kane, leads a middle-of-the-road offense with 15G and 11A. If you're bad at math, and if you're an MHHer we know you don't even recognize math as real (right, Hawerchuk?), that gives him a season total of 26 points!

Speaking of our old friend Hawerchuk, he's the proud co-manager for the Jets blog, Arctic Ice Hockey, and in a recent post about shiny new graphs uses his favorite team of all-time, the 2009-10 Colorado Avalanche, as a basis for his example. I'm sure this was no accident. Hi, Hawerchuk!