Share All sharing options for: Coyotes at Avalanche, Game 39 Preview 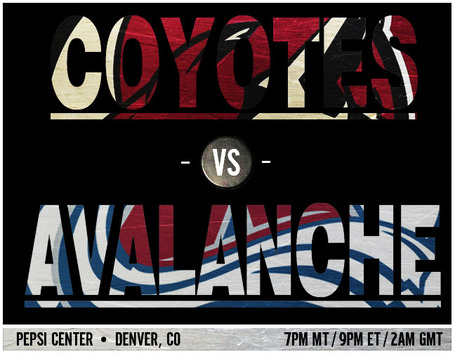 The Avalanche will attempt to get back on the W side of the standings when the visiting Phoenix Coyotes invade the Pepsi Center tonight. The Coyotes always present the Avalanche with unique difficulties as the kind of ultra defensive, collapse the net style seems to consistently challenge the Avalanche's speed demon hell on wheels offense to score in ways they're unaccustomed to. As a result, the Avs seem to only experience frustrating disaster against the Coyotes. Instead of rehashing recent failures against Phoenix or mentioning their second-best-in-the-West road record (11-7-1), let's just talk about all that could go right tonight.

First, it's the Avs' turn to be rested and play a team coming into the second game of a back-to-back after a hard-fought game one. The Coyotes had to stomach a rough 2-1 OTL versus insane buzz saw Boston in a playoff atmosphere level game before getting on the plane and heading to Denver. As detailed in yesterday's post by overlord DDC, tonight's game marks the return of Kyle Quincey and, much to Dario's delight, Chuck Kobasew to the lineup. With Kobasew's return, Brad Malone will be pushed to the press box for a taste of the always-delicious Pepsi Center nachos. A tough break for Malone whose game has been coming along slowly but positively in his short time in Denver. With no word yet on who Quincey will replace in the lineup, speculation on the internet runs rampant about the continued use of Matt Hunwick. It stands to reason he'd be the first guy off the ice but with the abomination of a game Shane O'Brien had the other day, I wouldn't be even remotely shocked to see him sit. Smart money goes to Hunwick, though.

With the return of Quincey, the Avs defense will only get stronger to face a middling Phoenix offense that boasts former Av Radim Vrbata, in the midst of a torrid pace (29 points in 37 games played) that if continued across the entire season would be a career year at the young age of 30. The other main offensive threats come in the form of familiar faces Ray Whitney, who continues to produce at age 39, and Shane Doan, who seems like he's been in the league for the last 39 years. The return of Chuck Kobasew, still seeking his 100th career goal, would have tested G Mike Smith...except Smith is currently on Injured Reserve. This puts the Coyotes in a bit of a sticky situation as they either have to run out the extremely average Jason LaBarbera for the second night in a row or play recently-recalled Curtis McElhinney. Don't recognize the name? He managed to shut out a floundering Avs team in Denver back on February 4, 2011 while a member of the Anaheim Ducks. Knowing the Avs history against backup goalies and their tendency to make everyone not named Martin Brodeur or Craig Anderson look like Vezina candidates on any given night, I'm sure everyone is dreading this as much as I am. Lesser of two evils: The career backup or the AHL starter/backup's backup with a shutout against us in this calendar year?

I believe in you, Avalanche <3