Share All sharing options for: Avalanche at Ducks, Game 40 Preview 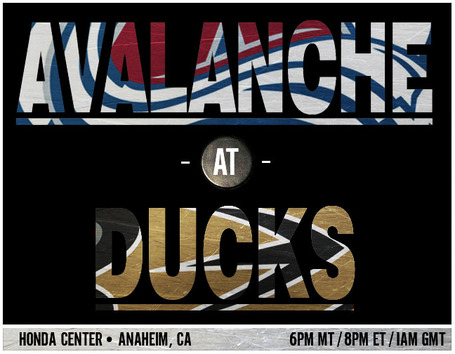 It took long enough, eh? The Avalanche are finally back to being the Avalanche we all know and love where injuries start to rear their ugly head around the turn of the calendar and look fit to totally doom our season and drive some of us into more even more frequent drinking binges (uhh...thanks, Avs). Matt Duchene's ultra mysterious "out at least a month" diagnosis is about the best I could have hoped for and it still doesn't leave me with any confidence we'll see the same Dutchy we've grown accustomed to. On the upside, maybe he'll realize he's a hockey player and not a spinning top with ice skates and a hockey stick?

Ahhh, yes. The Avs have a game tonight on this lovely conclusion of 2011. As we descend into the madness that will bring about the end of all days in 2012, I'm pretty nervous about this game. The Ducks have been so bad this season they're only one point ahead of the Columbus Blue Jackets in the standings. Their goal differential, -35, is good for dead last in the NHL. The only teams who have scored fewer goals than the Ducks are the Los Angeles Kings (wtf?) and the New York Islanders (this one makes sense, I guess). The only teams to have given up as many goals as Anaheim? Those same BJs, the Carolina Hurricanes, and Craig Anderson. Their star player and reigning NHL MVP Corey Perry has just 29 points in 36 games. Star forward Ryan Getzlaf has scored 2 goals since October 27th, a stretch of 27 games. He's their third leading scorer. They've been so bad, when you go to their official site the Kings logo takes up just as much space and leaves you confused as to which site you're on.

Why does all of this have me absolutely terrified? Because I'm an Avalanche fan and everything we've learned about this franchise over the last couple of years screams "PREPARE FOR DISAPPOINTMENT" on this eve of permanent page turning.