Share All sharing options for: Avalanche at Flames, Game 29 Preview 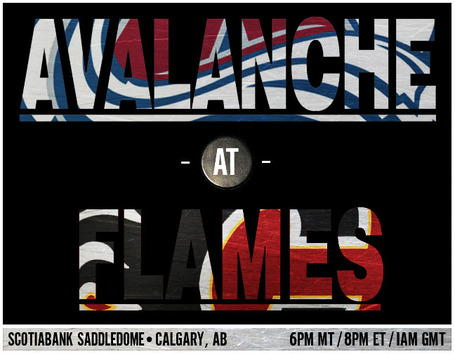 The Avalanche are in Calgary tonight in a game of vital importance. That's right, I want to keep my preview record above .500. That and the minor detail that the useless Flames are just 1 point behind the just-slightly-less useless Avalanche.

The Avs have lost 8 straight to the Flames, all in regulation. 6 of those eight games were either by one goal or to goals including an empty netter. In those eight games, the Avs have scored more than two goals a grand total of once. Yuck. Come on, people, it's the Calgary Flames! They have Olli Freaking Jokinen tied for their team lead. They have Scott Hannan on defense. Heck, they have some dude with TWO flippin' hyphens in his name. That's simply the work of the devil.

So lets rally, you Avalancheys, you. You just did something that had never been done in the history of the franchise: get shoutout by the Canucks twice in one season. Let's build on that gloriousness Sure, Ryan Wilson and Paul Stastny are doubtful and on Wednesday Matt Duchene skated with wingers T.J. Galiardi and Brandon Yip, a line that fills my heart with great despair. It's still the effing Flames. Let's do this. Please. My record is on the line.