Share All sharing options for: Avalanche at Oilers, Game 30 Preview 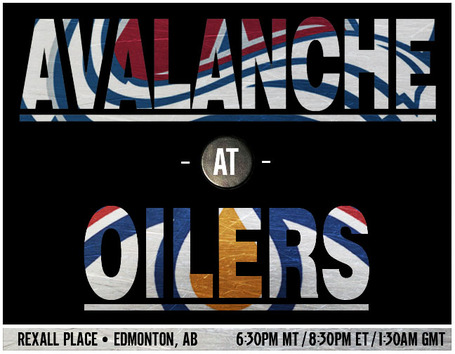 The Avs finish up their brief road trip through Western Canada tonight against the Oilers of Edmonton. After finishing strong with three consecutive wins on an 8-game home stand, the Avalanhe will hope to not limp to a 0-3 record on this road trip.

The Avs are wrapping up the back half of a back-to-back set, while the Oilers last played Wednesday, losing to Carolina 5-3. Edmonton is 4-5-1 in their last ten and on a 2-game losing streak despite the continued strong play of youngsters Ryan Nugent-Hopkins (30 points) and Jordan Eberle (29 points).

The Avalanche have been grotesque against their own division going 1-7 before last night's stumble in Calgary where the Avs gave Calgary over 14 minutes of powerplay time (the Avs had just under 2 minutes if anyone was wondering). The Colorado boys have to be better against their own division and also stay out of the box if they want to come out on top tonight against Edmonton.

The Oilers will be without the repugnant services of defensman Andy Sutton who has been suspended indefinitely for a bonehead hit on Alexei Ponikarovsky Wednesday night (he left his feet and head hunted). You may remember Sutton's name from his 5-game suspension earlier this season for a head hit on Gabriel Landeskog. Taylor Hall is still out after the big hit from Ryan Wilson and subsequent cross check from Kyle Quincey, but has resumed skating and as of yesterday was not yet cleared for contact. Meanwhile, The Avs are without Wilson (head) and Stastny (upper body), as well as Kevin Porter (suspended). So that fantastic Vancouver outing was not only a 6-0 drubbing, it also cost the Avs three two players. I want a refund.

The burning question about tonight's match up is: will Brett be 0-5 on previews or 1-4?