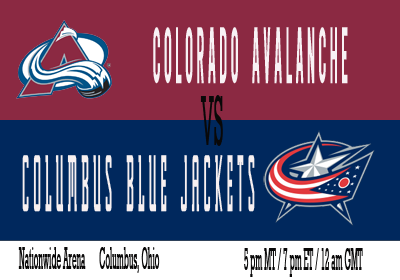 And, here we go. The Avalanche are looking to shake off a 5-game losing streak tonight against the Columbus Blue Jackets. The Avs would move up one or two places in the standings with a win...or, they can fall farther out of contention. Can we go with option A? Please? Something will need to give tonight, by the way. The Avs have won one road game in 2011 and the Blue Jackets have won two home games in 2011. Is is too late to arrange a neutral site game?

For the Avalanche, the lineup is in a state of flux. TJ Galiardi and Kyle Cumiskey are out with injuries and Craig Anderson has temporarily left the team for personal reasons. John Grahame has been recalled to backup Peter Budaj, but the real fun begins with the rest of the lineup. With Cumiskey out, either Adam Foote (recovering from the Columbus flu) or Jonas Holos (which is Norwegian for "Bum Steer"). Up front, one of two forwards will replace TJ Galiardi: David Koci or Peter Forsberg. Kind of a coin toss there, wouldn't you say?

The Avs could also use some help from some of the guys who've been in the lineup lately. Chris Stewart: 5 points, -11 in the last 13. Matt Duchene: 3 points, -4 in the last 11. Paul Stastny: 7 points, -8 in the last 14. I don't care how bad your defense is, when 3 of your best forwards are putting up numbers like that, you aren't going to win very many games. Maybe this Koci kid will save the day.

Fun Juvenile Fact of the Day: One of the hottest BJs of late is someone named Grant Clitsome (8 points in the last 10 games)

Fun Non-Juvenile Fact of the Day: Only one player on the Avs has a positive +/- over the last 9 games. That would be Matt Hunwick at +2.