If the Avalanche season was this silly blog

Share All sharing options for: If the Avalanche season was this silly blog 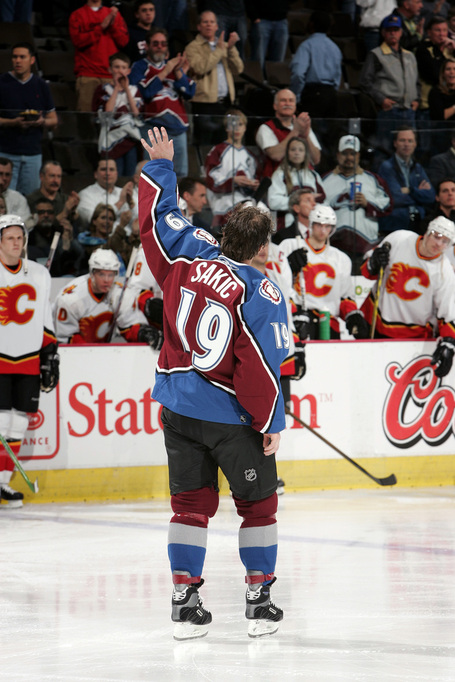 Why am I running a picture of Joe Sakic as we're mired in these quicksands of suckitude? Well, it goes like this. I do my MHH writing the night before, so last night I sat down to write my story for today. I'm also doing today's preview, which will be 100% devoid of shiny and happy, but my morning story is was going to be a positive one. Today, February 16th, marked the 4th anniversary of Sakic's 600th NHL goal, an empty-netter scored in a 7-5 win in Calgary. Yes, Brad May got an assist on the goal, but it was one of the last games as an Avalanche, so even that was a positive. The above picture is from a month later at the Pepsi Center when Sakic was honored for that elusive milestone that only 18 people hit. Bonus: no uniprons.

So, I sit down to write this article which could give us a small glimmer of hope...a small ray of sunshine breaking through the storm crowds...a rainbow unicorn standing out among a field of mud-covered hippos. And, I noticed one small issue with my plan: Sakic scored that goal on the 15th. FML.

I thought I'd share that bit of stupidity because I think it kind of sums up the Avalanche season as of late. Even the simple stuff is hard, it seems. Even a cutesy little fluff piece on Sakic was, like so much of the Avs' effort this year, too little, too late and poorly executed. Again, FML.