Avs' Winless Streak Not Yet All That Bad

Share All sharing options for: Avs' Winless Streak Not Yet All That Bad 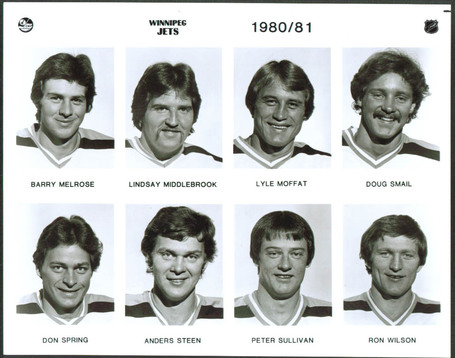 Avs fans may be feeling a little down-in-the-dumps as of late as Colorado is stuck in a depressing 10-game winless streak and the fates of its most popular young players are still unclear.

But rest assured, fans of the A, it could be worse. A lot worse.

Failing to win ten games in a row is no minor achievement, but it's nowhere near a record, either. In fact, it's just 1/3 of the way there. The record for most games not won rests with one of the very the worst NHL teams in all of history: the 1980-81 Winnipeg Jets.*

The Jets lost or tied 30 games in a row that year, a winless streak that began October 19, 1980 with a tie to the Quebec Nordiques and ended on December 23 with a win against the Colorado Rockies. That's right, the worst winless streak in history began and ended with some kind of connection (be it geographical or franchise) to today's Colorado Avalanche.

The poor Jets would only win a few more games after ending their streak, finishing the year with one of the most awful records in NHL history: 9-57-14. They allowed 400 goals and finished with just 32 points. Notable members of that team included Ron Wilson, Barry Melrose, and 1980 US Olympic team member Dave Christian.

So, on the bright side, the Avs are nowhere near setting a record for longest winless streak, even though it's possible since there are more than 20 games left in the season. But the likelihood that they'll set some new milestone for awfulness is pretty low, even considering how terrible the team is playing right now.

* The worst losing streak (17 games) belongs to both the worst-ever 1974-75 Washington Capitals and the second-worst-ever 1992-93 San Jose Sharks. Because the Avs tallied a point against the Penguins in an OT loss on February 16, their streak is now a winless one, not a losing one.