Getting to Know the M4 Medium Tank

Share All sharing options for: Getting to Know the M4 Medium Tank 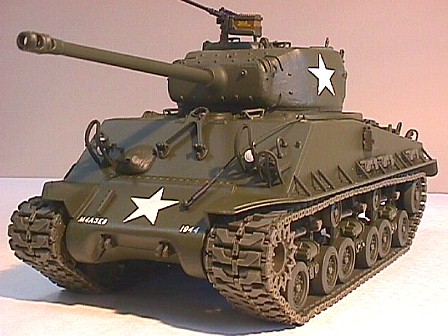 The primary battle tank used by the United States during World War II had the official designation of "Medium Tank, M4," but was nicknamed the "Sherman" after Union general William Tecumseh Sherman, infamous for his devastating slash-and-burn campaign across the Confederacy during the American Civil War. No relation to Avalanche general manager Greg Sherman in any way.

The Sherman tank carried a 75mm gun (later models had a 76mm gun) mounted on a fully traversing turret and had a top speed of about 30 mph. This relatively high speed helped the Sherman stay competitive on the battlefields of North Africa and Europe until being totally outmatched by later German tanks such as the Panther and Tiger models. American generals compensated for their obsolete technology and insufficient firepower with tactics that favored maneuverability and strength in numbers. An avalanche of steel, if you will.

The M4 remained in service with the United States Army until 1955, but saw combat even later with the Israeli and other foreign armies. The Sherman was replaced by the M26 Pershing heavy tank and the M46 Patton medium tank.

The Sherman has appeared many times in popular culture, but the most notorious and entertaining example may be from the World War II adventure movie Kelly's Heroes, starring Clint Eastwood, Telly Savalas, Don Rickles, Carroll O'Connor and Donald Sutherland as "Oddball."

Now you know. And knowing is half the battle.