Share All sharing options for: The Official Dr. Wolski Newsletter

And we're back! Let's ignore the fact that there have actually been more of these now than there have been actual Dr. Jones newsletters and get going with some fantastic news, views, reviews and... uh, intrus-ions... yeah, that's close enough - about our favorite player, Wojtek Wolski!

Woltek Wolski is a shining example of just another terrible trade by the Colorado Avalanche, scoring approximately 3200 points since leaving for the Coyotes and now the Rangers - him being traded to the Rangers mostly because the NHL felt that he should show his amazing talents in front of larger crowds than there were in Phoenix - and having at least 1000 of those come against the Avs for good measure. Meanwhile the guy who replaced him hasn't done anything! Sure, he's claimed to be injured or something but I don't buy it. The Mueller guy just can't score! What a terrible trade.

Time for some WOLSKI FUN FACTS!:

* Wilt Chamberlain once bragged that he had slept with over 10,000 women in his lifetime. Wolski prefers to call that "A slow tuesday.

* Quite literally every goalie in the known world has figured out his shoot-out move. And when I say "goalie" I'm including those elementary school goalies that the Pepsi Center always parade out during the little pee-wee shootouts during intermissions. They could probably stop Wolski 9/10 times.

* Wolski has gone back in time to get a pet Dinosaur. It is a Deinonychus and is worse than Wolski at shooting due to is undersized arms. As such, he has named it Svatos.

And now the WOLSKI PIC OF THE DAY!!: 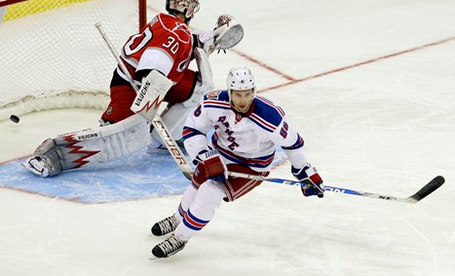 Pictured: Cam Ward getting his ass handed to him by the greatest player to ever wear any colors on the ice. I was going to say specific colors but we all know we'd just be fooling ourselves to say he's accomplished less  than anyone. That Gretzky guy totally has a picture of Wolski as a centaur over his bed. (I guess it's not all that impressive since it was against Cam Ward, just pretend Hasek is in net or something to make it look more impressive.)