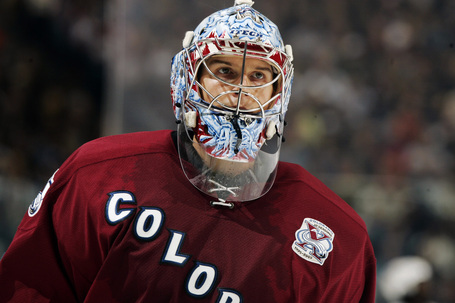 Yesterday, Geoff Detweiler at Broad Street Hockey provided a spreadsheet a user had put together that listed every goalie since 1998 and their save percentages at even strength, shorthanded (PP Sv%) and on the powerplay (SH SV%). I thought it might be fun to take that data and see how it breaks down for Avalanche goalies.That is, until I got to the end, and found some very alarming trends. We'll get there, but first, let's see the numbers. Again, this is just from '98 on, and only includes seasons with the Avalanche, except in cases where a player was traded midseason, in which case it includes both.

The first thing I did was rank the players by even strength save percentage.

Of course, the best season here belonged to Patrick Roy...woah, hold on. Actually, it wasn't. That honor went to David Aebischer, the first season after Roy retired. Did not see that one coming. Then again, one of the worst seasons by a goalie was put in by Aebischer as well, two seasons later. That was the year he was traded...for a guy who actually did have the worst season on the list (apologies to Rick Tabaracci, wherever he is).

If we dump the scrubs (10 games or less) and sort by overall save percentage, you get the following:

Again, Abby is all over the place as is Peter Budaj. Theodore had some very poor seasons in Denver and Patrick Roy is freaking awesome. Oh, and the current season by Craig Anderson and Peter Budaj are not very good. Raise your hand if you didn't already know that!

Finally, I totaled everyone up to see how everyone compares. Again, Abby & Theodore include some numbers from their '06 season with Montreal, and Roy's stats are from '98 on only

The first thing that came to mind: Jose Theodore wanted how much money to stay here?

The second thing? Peter Budaj has terrible numbers shorthanded (PP SV% = save percentage against the other team's powerplay). His .844 total save percentage is lousy (at least compared to other Avalanche goalies). His best season against the PP was 2009, when he managed .858 - still far below the pace. And his two worst seasons? Last season (.800) and this season (.809).

Conversely, Budaj's numbers against the other team's penalty kill are outstanding. He's allowed just 10 SH goals in his Avalanche career (183 shots against). Craig Anderson has allowed 11 (12, really) in one and a half seasons and just 96 shots. I'm sure jibbles is just screaming "small sample size" right now, but it might not be a bad idea to sub in Anderson any time the Avs are shorthanded, and make sure Budaj is between the pipes when the Avs have the PP.

Most interesting, though, would be the strikingly similar numbers shared by Craig Anderson and David Aebischer. The similarities don't stop with the numbers above, though. Both goalies were mid-round picks (3rd for Andy, 6th for Abby) and spent several years as a rock-solid backup before finally getting a shot to start. Both excelled when given the chance - Aebischer won 32 games for the Avalanche in 2003-2004 while sporting a .924 save percentage and 2.09 GAA. Andy, of course, had a similar breakout year in his first season as a starter, winning 38 games while notching a .917 save percentage and 2.64 GAA.

And here's where the worrisome part comes in, especially if your name rhymes with Haig Flanderson. The following season, Aebischer struggled (.900 save percentage, 2.98 GAA) and was traded at the deadline to the Canadiens. He never really regained his form and was out of the NHL just 40 games later (he's currently playing in the Swiss league). Anderson is also struggling mightily this year (.903 save percentage, 3.12 GAA). A year ago, Anderson appeared to have a stranglehold on the starting goaltending position for years in Colorado, much like Aebischer did in the summer of 2004. Could Anderson be moving elsewhere at the deadline? It's not a move without precedent.