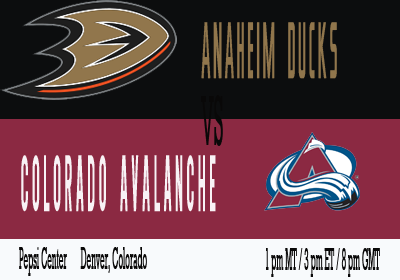 So today the Avalanche face off against the Ducks for the last time of th-- oh wait. Here we are, more than half-way through the season, and Colorado and Anaheim are matched up for their very first game. There was a time when playing the Ducks would seem like a perfect way to get the winning back on track, but things are rolling quite well for our feathered foes right now. They've won 12 of their last 16 games, riding on great goaltending by Jonas Hiller and some serious offensive numbers, including those by defenseman Lubomir Visnovsky. Who? Lubomir Visnovsky. He only has 43 points in 52 games. Oh, and he hits people. And is kind of a bad-ass. Too bad we don't need anyone like that.

I don't have to tell you that Saturday afternoon games haven't been friendly to the Avs (0-1-1 this year alone), but David Jones will be back today. That's something, right? Right?? Unfortunately, we won't have Ryan O'Reilly, and that despicable dude hasn't made any decisions yet. However, all is not lost. Despite the fact the team seems to be in a free-fall, they actually still have some guys that have talent. Chris Stewart was reminded what scoring feels like on Thursday, and with Jones back in the line-up, we've got two decent top lines again. Budaj is in net, sporting a solid 8-2-2 record, .913 save percentage, and 2.91 GAA at home.

So grab some Kool Aid and take out that rainbows and unicorns sweatshirt and get ready for some hockey...Avs style.