Share All sharing options for: Game 53 Preview: Colorado at Phoenix 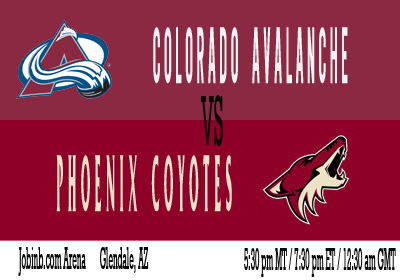 Well, the Avs are going on the road and, at this point, that can only be considered a good thing. Obviously, the Avs have to be feeling the pressure to start winning again and home ice isn't the best place to try and forget that pressure and just start playing. Their record on the road isn't spectacular (11-8-3) but thanks to this disastrous run of games at home, the Avs are going to have to win on the road if they want to make it into the playoffs. One thing the Avs do seem to be good at on the road, especially in comparison to home, is the penalty kill--as anyone who has watched a game with the Altidudes commentating on should be well aware. That might be coincidence more than anything but, hey, maybe it'll give the pkers a little confidence. Unfortunately, the other reason for optimism, Forsberg will not be playing tonight but theoretically the Avs have a few other offensive weapons. It would be nice to see Stastny or Duchene dominate a game, not to mention a certain Chris Stewart.

Phoenix is in the same dogfight for the final five playoff spots in the West as the Avs though they sit in better position than the Avs. Part of the reason for that is they beat the Avs in two demoralizing games at the Pepsi Center this January. It'd be nice to return the favor, I think. Interestingly enough, Phoenix is led offensively by two defensemen, Keith Yandle and Ray Whitney. Shutting them down will be key if the Avs want to win this game. Another interesting fact is that the Coyote's scored more goals in their last game against Colorado (5) than in the three games since (4). Hopefully facing the Avs isn't exactly what the Coyotes need to get rolling offensively again.