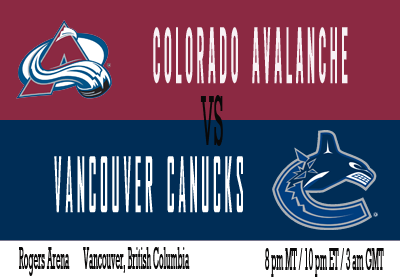 The Avalanche begin a crucial 3-game road trip across western Canada, kicking things off tonight in Vancouver. By "crucial", I actually mean "contractually obligated". Sorry for any confusion there.

These two teams last squared off on January 18th in Denver. At the time, the Avs were 12 points behind Vancouver and were looking to prove they could hang with a team like the Canucks, and the game featured the 3rd and 4th ranked offenses in the league. The Avalanche pulled off a dramatic win with Milan Hejduk tying the game with less than a minute to play and David Jones (who else) scoring the game winner in overtime as the Avs won their second game in a row.

The Avalanche have won 2 games since that and their offense has fallen from 4th to 14th overall. The only race the Avs are in now is the race for worst record (they are just one point "behind" Ottawa in the tank race; the Sens play New Jersey on Wednesday.  Vancouver? Uh, still going kind of strong. This should go pretty well then.

John-Michael Liles and Paul Stastny are expected to return to the lineup tonight. Yay for small victories!