Where Are They Now? (Episode 2)

Share All sharing options for: Where Are They Now? (Episode 2)

Last episode we checked out Wolski, Svatos, Laperriere, Hendricks and Colby Cohen. Today we check in with 7 former Avs to see where they are now. 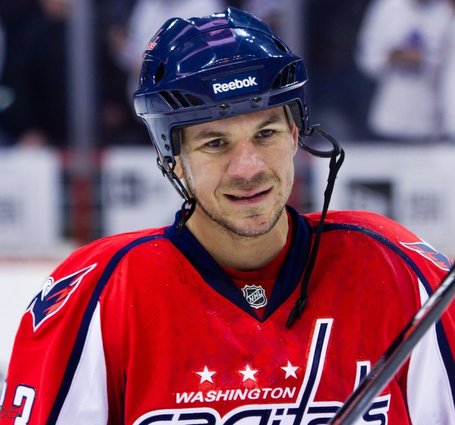 On November 30th, the Washington Capitals went after Scott Hannan to help shore up their suspect Defense, but in exchange had to give up a promising young player in Tomas Fleischmann. We all know how that ended up for the Avs (side note: Flash skated Tuesday with the boys), but how is the Hobbit fairing in our nation's capital? Well, his numbers are on par with the last two sub par season's numbers (1G, 4A, 5P, +2 in 48 games), but Scott is still well below his 20 point days in San Jose. Interestingly enough, Hannan tallied 6 points (all assists) this season in only 23 games with the Avs. The Caps have been hot of late, and so has Hannan, going +14 in his last 39 outings while only being a minus 4 times. He also snapped a 118 game goalless streak on March 3rd, netting his first goal as a Capital. As of Thursday afternoon, Washington sits 1 point behind the Eastern Conference leading Flyers, and are 9-1 in their last ten games. They once again look ready for that long playoff run - which they've yet to enjoy - but perhaps the addition of the veteran D-man will be the little boost they need to make a run at the Cup. Who knows, big things have been known to come from little Hobbits. 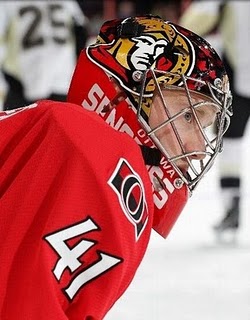 Well, this one is sad. After a career year and stellar post season run in 09-10, the honeymoon ended on Feb 18th when the Avs and Sens swapped under-performing net minders. The next day Andy threw down a 47 save shutout win in his first game as a Senator. I would call him a jerk, but from recent reports it sounds like the Avs' front office may be the culprits.

"For me, it's not about the money," Anderson said. "It's about having a good fit and finding a place where I'm going to be happy, where players are treated with respect and the organization communicates with their players. It's just a good feeling that makes you smile and makes you want to come to the rink."

Anderson wanted a long term contract offer and the Avs weren't listening. When you read this article, it sure sounds like Anderson was unhappy with how the Avs were treating him and possibly others. I don't know why his play dropped off so tremendously, but as a professional speculator, I'd wager his perceived mistreatment at the hands of Avalanche management played a significant role.

His numbers since joining Ottawa at the bottom of the Eastern Conference look like this: 6-4 with a 2.11 GAA and .938 save%. It appears he found his game again, as the Senators would agree. They extended Andy a four year, $12.75 million contract extension this past week. It's a shame that just months after it appeared the Avalanche had solved their goal tending woes, they sent that answer packing. At least we'll only see get shutout by him once a year.

Fun Fact: Anderson holds the Avalanche record for most starts by a goalie in a season with 71. 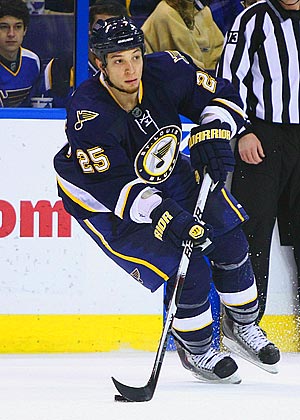 This one is gonna sting for awhile. The Avs gave up Chris Stewart for what they hope to be a franchise cornerstone in Eric Johnson. There's no doubt the Avalanche defense was lacking and needed a fix. I for one am glad that they addressed the issue, but it still hurts to give up Stewie. He was the Avs leading scorer with 25 points in 23 games before he broke his hand in a fight. He came back from injury with a whimper scoring only 5 points in 13 games before the trade. In his young NHL career, Stewart has shown he can be streaky, and he continues that trend with the Blues. In his first 11 games with St. Louis he scored 12 points (9 goals), but in his last 6 games he has 1 point, an assist. Last week, NHL.com listed him on their list of players struggling through a cold streak.

Besides the quality numbers, Stewart is a rare and essential breed: a true power forward. He's big, he uses his body well, he's good around the net both in terms of screens and with his hands. Every team needs and wants a true power forward, and the Avs gave up a potential filled 23 year-old with a bright future ahead of him. As much as losing Stewie will hurt the Avs, the addition of Eric Johnson has seemed to calm down the Avs blueline a bit - even if it isn't translating into dominating wins. Johnson plays with a ton of confidence and that can be contagious. 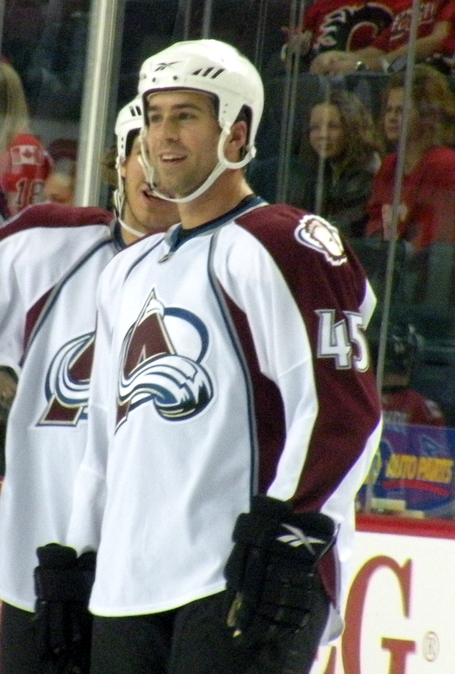 After a "rookie" season in '09-10 that saw Durno post 8 points in 41 games with the Avs (and 18 points in 17 games for Lake Erie), he left via free agency and signed with the Yzerman re-focused Tampa Bay Lightning July 25, 2010. Durno has yet to crack the line up in Tampa, playing the entire season with the Norfolk Admirals of the AHL (his second time with the team) where he has posted 17 goals and 33 points in 64 games, to go along with 122 PIMs. This season, the Admirals named Durno their captain, and currently sit in 5th place and playoff bound in the Eastern Conference.

"Chris Durno is a natural leader for the Admirals. He has earned his way through the professional ranks from the ECHL to the NHL. He has played over 550 professional games – including more than 50 playoff games. His experience has been and will continue to be invaluable to this team as we look to develop the future of the Tampa Bay Lightning and bring a winning tradition back to Norfolk." ~ Admirals Head Coach Jon Cooper

Durno is a hard working, big, tough, blue collar player. He has carved out a solid AHL career and didn't look out of place as a fourth liner in the NHL. Not bad for a guy who went undrafted. Good luck Chris! 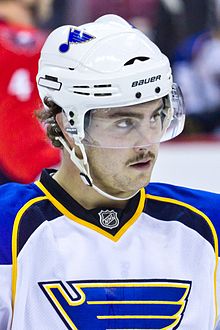 Seriously, love that 'stash. He looks like he could have played in 1975. It seems like we were talking about Shattenkirk for years, anticipating his mighty NHL debut. He broke into the league this year after being called up from the Monsters, but started slowly, notching just one assist in his first 6 games. But as he got comfortable, he exploded for 18 points in 15 games, including a 9 game point streak (only the second time an NHL rookie defensman has amassed a 9 game point streak). Not only was his point scoring impressive, but also his ability to read the play, jump in, and make an impact offensively. He wasn't amazing defensively, but he wasn't suspect either. The kid is smart, makes great decisions (mustache not withstanding), and boasts way more confidence than a rookie D-man in this league should.

He has slowed down significantly, as was inevitably going to be the case, but he is still scoring at a clip any defensman would brag about. Shatty averaged .56 ppg with Colorado and .41 ppg with the Blues. The former BU captain also broke a 25 game goalless streak when he potted St. Louis' lone goal last Tuesday against Phoenix. Shattenkirk has leader written all over him and we shouldn't be surprised to see him being a top scoring defensman in the NHL for a long time to come, maybe even with a "C" on his chest.

Another former Avalanche to have a found a home in the AHL as Captain is another awesomely mustached fan favorite: Ben Guite. After 2 and 1/2 solid season with the Avs, Guite signed with Nashville where he only played in 6 contests in 09-10. He started the season with the Preds, but after going pointless in four games, they re-assigned him to the Milwaukee Admirals. He spent most of the season with Milwaukee, where he totaled 21 points in 64 games. The Columbus Blue Jackets then signed Guite in the off season and he has played well for the Springfield Falcons going 14 and 25 for 39 points in 64 games. His best stretch was in February when he tallied 10 points in 10 games. He was named captain of the Falcons back in October, when he also became a father for the first time. The Falcons currently sit in 6th place in the Atlantic division, out of the playoffs. Nothing but good wishes for Guite.

Fun Fact: the Montreal native has a bachelor's degree in English and a master's degree in business from the University of Maine. He ain't no dummy ya'll. 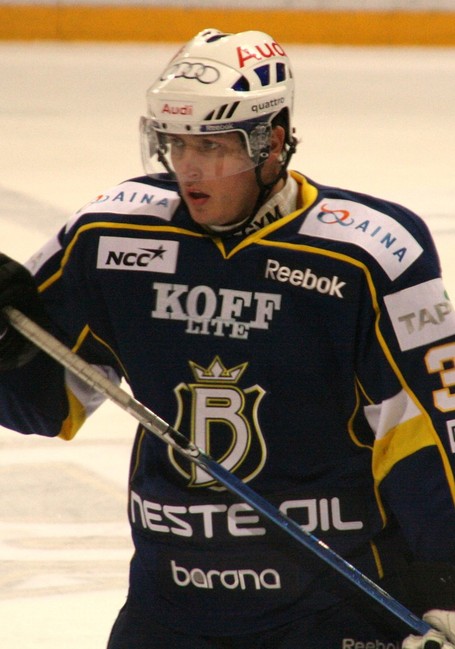 It was only two years ago that Arnie "played" in the NHL with the Avalanche. Since those dreary days, he has seen time in the AHL with Hartford (3 assists in 11 games - he also got suspended by the Rangers), Dinamo Riga of the KHL (11 points in 26 games); and then this season he has played in Switzerland with both EHC Biel (10 points in 9 games), and EHC Visp (1 game 1 goal). This season with the Swiss marks the first time in his professional career that he has been a point per game player! Alas, nothing gold can stay, and poor Trailor couldn't keep it going. Since being traded to the Espoo Blues of the Finnish league he's totaled 4 points in 8 games. So for those of you keeping track at home (I know, it's confusing), that makes 5 teams in two seasons since not being asked back by the Avalanche. Like a record player, Tyler gets around!