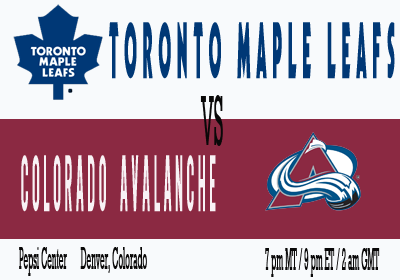 Everyone back on the bang bang bus. The Avalanche are rolling again, having dominated two quality opponents in a row in an overwhelming fashion (read: shootout). Tonight, they host the Toronto Maple Leafs, a team that isn't much better than the Avalanche...but one that is still in the playoff hunt (thanks Least Conference). The Leafs should be fired up; at 5 points out of 8th, they need to win most of their remaining 8 games to have any chance of a postseason berth. Both teams are going for their 3rd win in a row tonight, a feat neither has pulled off in some time. The Avs last won 3 in a row back in December, the Leafs' last 3-game streak ended on January 11th.

The Avalanche have two hot players in Matt Duchene and Mark Olver. Duchene has a point in 5 straight games (8 overall in that stretch) and Olver has 4 points in 5 games in his most recent call-up. Expect them to be paired again with Dan Winnik to form a "DO Win" line (yes, I just made that stupid name up). And, if recent play is any indication, expect them to be pretty much the only line trying very hard.