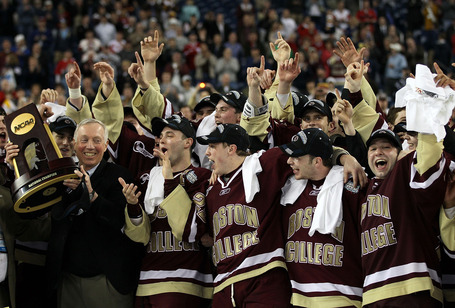 The 2011 college hockey national tournament kicks off today and the 16-team tournament field features four Colorado Avalanche prospects: Paul Carey (Boston College), Brad Malone (North Dakota), Luke Moffatt (Michigan), and Gus Young (Yale). Each player has had a varying degree of impact for their clubs; some more than others. The tournament also features three schools from the state of Colorado. Will any of them be able to dethrone defending champion Boston College? Will any of the other non-Colorado schools?
East Regional (Webster Bank Arena, Bridgeport, CT)

The Yale Bulldogs spent the bulk of the season at or near the top of the national rankings. Unfortunately for Gus Young, he missed out on most of the fun. Young, who was selected by the Colorado Avalanche 184th overall in the 2009 NHL Entry Draft, spent most of the season out with various injuries. Because of Yale's success without him, Young found himself warming the bench upon his return. He has only suited up for five games this season and has a single assist. It's unknown whether Young will play in this tournament, but expect a much larger role for the defenseman next season.

Yale will be facing one of the three Colorado schools in the tournament in Air Force. The Falcons are the winners of the Atlantic Hockey playoff conference. Tournament appearances are starting to become old hat for Air Force. This will be their fourth appearance in the last five years. Air Force upset Michigan in the first round two years ago and hopes Yale will meet a similar fate at their hands.

The Michigan Wolverines have won the most Division I NCAA hockey championships at nine. They have however been stuck at that number since they last won it all in 1998. Michigan won the CCHA regular season conference championship, but was upset in the conference semifinals by Western Michigan. Freshman, and the 197th overall selection by the Avs in 2010, Luke Moffatt, spent most of the season scouring on the bottom two lines for Michigan. He suited up in 32 games and contributed with five goals and eight assists.

Boston College, who has won the national championship twice in the last three years, will be looking for their fifth title. Paul Carey, who spent the bulk of the season as a top six forward for the Eagles, will be looking to improve upon his best statistical season. The Avalanche used the 135th pick in the 2007 draft to select the Weymouth, MA native. Entering the tournament, Carey has 25 points in 37 games.

BC will be facing a Colorado College team that hasn't won a national hockey title since 1957 (something their rivals in Denver haven't let them forget). St. Louis fans attending the regional will get a treat as they will get a chance to see their 2010 first round pick, Jaden Schwartz, in action. His season was limited due to injury, but he compiled 42 points in 28 games as a freshman for the Tigers.

North Dakota goes into this tournament as both the regular and post-season champions of the WCHA. Senior Brad Malone has had his ups and downs this season with the Fighting Sioux, but he hopes to finish off his career with a shiny new ring. Malone was drafted 105th overall by the Avalanche back in 2007. Malone enters the tournament fifth in team scoring with 36 points in 40 game. North Dakota's opponent, RPI, is coached by former Denver assistant Seth Appert.

The second semifinal game features the University of Denver and the surprising Western Michigan Broncos. Like North Dakota, Denver is looking for their eighth national championship in Men's Division I hockey. After winning back-to-back titles in 2004 and 2005, success in the tournament has come up short. In 2010, Denver was upset in the first round by the Rochester Institute of Technology (RIT). While RIT made it to the Frozen Four, it was just another string of disappointing performances by the Pioneers in recent years.

Now with a younger team, Denver is hoping for a different outcome. The Pioneers feature two sets of brothers in Kyle and Shawn Ostrow and Drew and Nick Shore. The latter pair are Denver natives and the younger Shore, Nick, is expected to be a second round pick in the 2011 NHL Entry Draft. Overall, the Denver roster features seven players from the Centennial State. Colorado College does not have a representative from the state on their team; whereas Air Force has six.

This regional does not feature any Colorado schools or Avalanche draft picks. Notre Dame does have defenseman Sean Lorenz, from Littleton, CO, who was a draft pick of the Minnesota Wild back in 2008. The junior defenseman has racked up four goals and nine assists in 41 games.

Miami head coach, Enrico Blasi, was once coached by current Denver head coach, George Gwozdecky, back in the early 90s. After completing his playing career, Blasi was an assistant coach at DU, under the tutelage of Gwozdecky from 1996 to 1999. He has been head coach of the Miami RedHawks since the fall of 1999.

This year's Frozen Four will be at the Xcel Energy Center in St. Paul, MN from April 7-9.