Where Are They Now? (Episode 3)

Share All sharing options for: Where Are They Now? (Episode 3)

Part 3 in our exciting and scantily-clad series. Now with more Theodore. Enjoy. 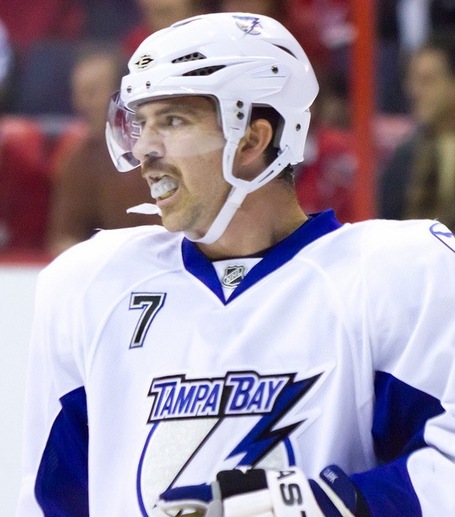 As you can see, not much has changed, Clarky's mouth guard still doesn't fit in his mouth. Clark has flourished in his new  West-Central Floridian surroundings. He's enjoying his best offensive production since 06-07 when he put up a career high 39 points in 82 games. This season, Clark ranks 1st among Lightning defensemen with 8 goals and 29 points, is 3rd among NHL defensemen in S% with 9.8, has the 4th-most PPGs among NHL defensemen with 6 and ranks 5th on the team in that category, he also leads Lightning defensemen with 17 PPPs, leads the team with 142 Blks, is 3rd on the Lightning with 111 hits, and owns 8 of the Lightning defensemen's 19 goals this season. Set a new career-high in PPGs by scoring his 6th on 2/4 vs. WSH and recorded a career-high 5-game (1/25-2/8) points streak. He has also played in all 75 of the Lightning's games. So, Clark is doing just fine and dandy with his new cup-contending friends in the Eastern Conference. I don't miss him. 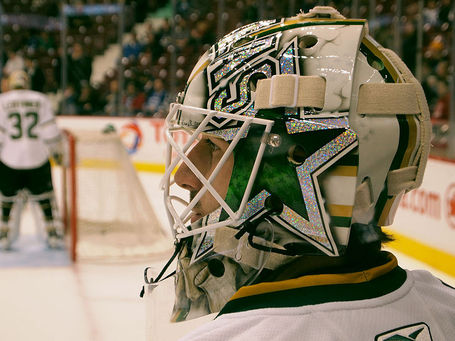 OOOOOOOHHHHHH! Sparkley helmet! Just imagine what it looks like under a black light with a Pink Floyd album spinning backwards!!  Playing with his 4th team in as many seasons, Razor has played fewer games this season than in any of the previous 7 years. His numbers aren't awful: 8-5 with 2 shutouts, .911 save%, and 2.75 GAA. Although, he has allowed 12 goals in his last 2 decisions. What's really weird with the former Calder Winner are his home vs away stats:

Must be something in the water weed there in Big D......

Part of the sweet trade for Ryan Smyth, Preissing is a bit of an enigma. After scoring 43 points in 74 games with Sharks in 05-06, and then 38 points in 80 games with the Sens the next season, Tom scored only 32 points over parts of the next three seasons with LA and Colorado. And despite leading Lake Erie Defensmen with 31 points in 49 games, his bloated contract and seemingly indifferent attitude/play led him to being bought out by the Avs on June 30th 2010. Here's what happened next:

"Without NHL interest, Preissing returned to Europe for the first time since 2005, signing a one-year contract with Kärpät of the Finnish SM-liiga on September 16, 2010. Under the agreement, Tom first joined Kazakh team, Barys Astana of the Russian KHL, to start the 2010–11 season on a 2 month loan through to November in order to attain game conditioning.[14] On September 17, Preissing made a successful debut with Astana scoring a goal in a 5-6 overtime loss to Salavat Yulaev Ufa.[15] However, just two days later in his second game in a 4-1 victory against Metallurg Novokuznetsk, Preissing's tenure in the KHL was cut short when he suffered a serious knee injury. Due to return to Kärpät in November, but with the prospects of being unable to play from the injury, Preissing came to a mutual agreement to terminate his contract on October 11, 2010." ~ wikipedia

This means the former CC defensman is a free agent. Buyers beware. 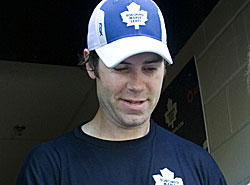 Finger quickly became Leafs fans favorite whipping boy after he signed for a ridiculous $3.5 million per year on the heels of his "breakout" season with the Avs in 07-08 when he dropped a massive 19 points in 72 games. Well, where is he now? He's still in Toronto, but playing in the AHL. The Maple Leafs put Finger on waivers after one preseason game. In 23 games with the Marlies, Finger has 5 points, all assists. 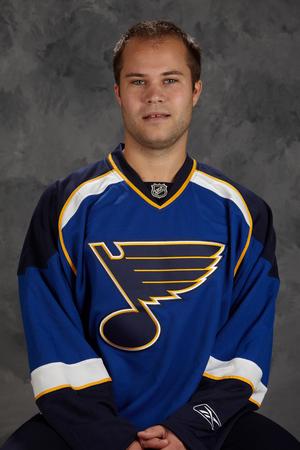 Where has Hensuck/sick been hiding? Well here's some breaking news from last week :

He's baaa-aack! After brief stints with the big club in November and then January, Hensick has finally cracked the injury plagued Blues' roster. He's played the last 8 games for the Blues and is currently riding a 2 game points streak (1G, 1A). In his 13 NHL games this season, the "other TJ" is averaging less than 9 minutes per game and has 3 total points. Last year wiith the Monsters, Hensick led the team with 70 points. This year with the Rivermen of Peoria, TJ is once again leading his team to the tune of 61 points in 53 games, good for 11th in the AHL (side note, former AV Darren Haydar is 3rd overall in the AHL), and also notched a goal and assist in the AHL all star game. Hensick's 1.15 ppg are fourth in the league. The Rivermen look poised to make the playoffs (unlike the Blues), and got a boost when the blues sent Hensick back to Peoria after the Blues' game Sunday. With the Blues' season essentially over, it makes sense to send Hensick back to his team to get some actual playoff experience.

He is still only 25 so Hensuck still has time to become Hensick, but if he doesn't establish a decent and consistent NHL game soon, he'll have to get used to a career of tearing up the AHL a la Darren Haydar.

Does anyone remember who we traded him to the Blues for? Julian Talbot. Who? He's got 39 points in 70 games with the Monsters, good for 3rd on the team. Blues win this trade. Anyone see a pattern?

Here's a sad and fun behind-the-scenes video from TJ's days with the Avs/Monsters (cameos by Chris Stewart and Cumiskey?):

The most surprising thing about the video is that his girl is not ugly by any stretch. He must be HenSICK in the bedroom.... 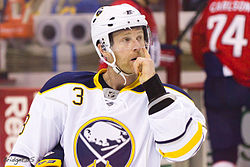 At the start of the season Leopold was one of the hottest defensmen in the league, scoring 16 points in the first 25 games. But J-Leo has only tallied 3 points in his last 17 games. Before this recent cold streak, Leopold had actual been one of Buffalo's most consistent players. Overall, Jordan has orchestrated a solid come back year by setting career highs in goals (13) and points (35), but he is also a -11. Leopold also leads all Sabres d-men with 13 goals. It's nice to see the 30 year-old Minnesota native find some success with his 5th team in as many seasons.

However, Leo is not one to shake reputation, and so broke his hand when he crashed into the goal post last Friday. Uncharacteristically, Leoprone stayed in the game and even scored a goal?!? He is listed as out indefinitely, but was seeing a specialist on Monday for further evaluation. Buffalo is fighting for their playoff lives every night and could definitely benefit from a healthy Leoprone (oxymoron). 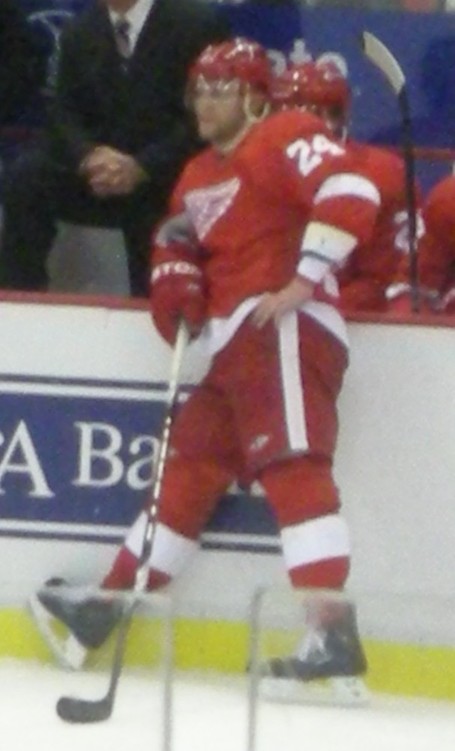 Yes, there are better quality pics of Rusty out there, but none capture his patented lust for life like this blurry cell phone image.

Congrats to Papa Salei and his wife who just had a baby. Too bad it was born in Detroit.....

Ruslan has 10 points in 69 games as an evil bastard. And only 1 point in his last 16 contests. His highlights this year are: playing in his 900th game and collecting his 200th point. Other than that, who cares. He's a traitor. 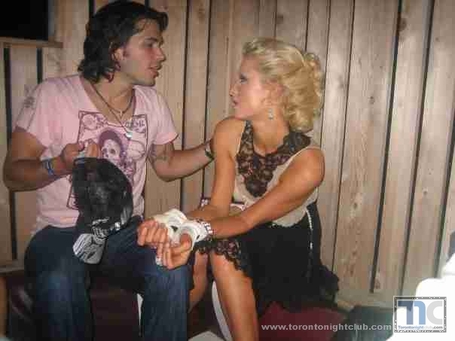 The former MVP's 2010-'11 numbers go like this: 12-10-3, .915 save%, and 2.78 GAA. In his last three games played Theo's allowed 12 goals and is 0-3. His composite numbers are a tad better than the last two seasons with Washington, other than the fact that he played and won a lot more games with Ovechkin and Co. Theodore possesses breath-taking skill, but seems to care more about his hair and partying with stupid people (see photo above) than hockey.

Contract Status: Like Josh Harding, he'll be a UFA this summer. Hold your damn horses Lacroix, and choose wisely!!!!

(Note: All Stats in this article were taken before Monday's games)