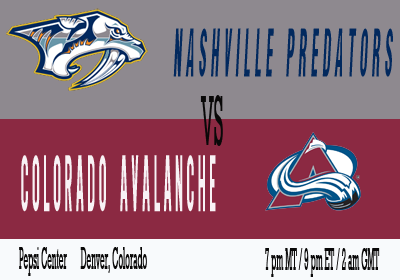 The Avalanche get an opportunity to avenge the loss to the Preds earlier this month. Now whether they'll take advantage of that opportunity remains to be seen. It's not going to be easy, though. Nashville is boasting a 9-3-2 record for the month of March and are coming off a loss to Vancouver that broke a 6-game winning streak. I suspect they might be a bit hungry for a win. Although they sit 7th in the conference, the parity that is the West puts them only 3 points behind 4th-placed Phoenix with a game in hand. So there's another reason they'll be working hard from the first puck drop.

The Predators are also looking to sweep the Avs this season; if they do, it will be the first time in team history. Given the fact they've outscored Colorado 14-6 during their three previous meetings this year, I don't think the sweep is that big of a stretch. However, it seems the boys in burgundy and blue have taken the role of spoiler to heart, so don't count them out just yet. Moreover, they've managed to keep the Preds to just one power play goal thus far. Pretty amazing feat considering how bad the Avs' penalty kill is.

Watch for Mike Fisher to be hitting the net as he's scored three goals in the past two games. Oh, and don't forget about that Shea Weber character. He's tied with Martin Erat for most points on the Predators' roster. Nashville knows Duchene is hot right now, so expect him to get some top coverage.

Although Wilson skated on his own yesterday, he didn't practice with the team. It's doubtful he'll play tonight. Foote didn't hit the ice at all, so don't plan on seeing him. As it stands, the Avs only have 5 healthy defenseman ready for the game; a call-up from Erie is likely. [EDIT: Gaunce has been recalled]. Elliott's in net.

(Speaking of Lake Erie, on Friday, April 1st, the Monsters are hosting a "Bring your dog to the game" night as they face the Hamilton Bulldogs. I love it!)