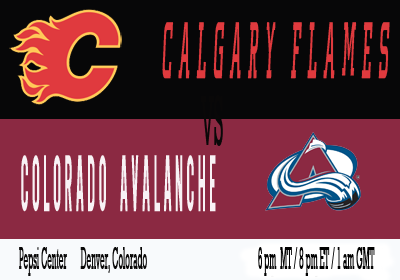 Bang, bang, bangity bang! The Avs are riding a serious win streak right now, and here's to hoping they can keep the bus rolling. At this point, the tank has done its job. Barring a major implosion by both Ottawa and Florida coupled with an actual serious win streak, the Avalanche are set with the second pick. Of course, although the Sens are cruising at .500 right now, Florida is on a Colorado-esque losing binge. Was there really a time when an egotistical goalie wearing a big A on his chest made the bold - and prophetic - claim that there would be no more rats? How the mighty former Cup finalists have fallen.

Anyway, back to Calgary. They're desperate for a win. And I don't mean that in the cliche, "We really need these two points so we've got to play a full 60 minutes and not overlook them" kind of way. Seriously. If they don't win, they're as done as a can of Coors Light at a Broncos tailgater. If they get an OT loss, they'd need Chicago to bite the dust to bolster their April golf-avoidance plan. Now, I could be wrong, but I suspect our boys would find a whole lot of joy pushing along the fade of post-season dreams for the Flames. Not only is it fun to win, but it's fun to make sure a division rival loses.

So who's hot on the Flames? (I seriously did not mean to make such a lame pun. You'll survive.) Duh. Jerome Iginla is being Iggy. He's got 9 goals and 3 assists in the past 7 games. I know, huh? And to think he was the subject of major "dump the extra weight" talk earlier this season. He's only one goal away from reaching 40 on the season, which would be the 4th time in his career that he's accomplished such a feat. He's also only 3 points away from becoming He just became the 77th player in NHL history to reach 1,000. You're playing the Avs, man. Consider it done.

I refuse to talk about the last meeting between these two teams as it never, EVER happened. And I'm not touching on the points comparisons between Duchene and Tanguay. Instead, I will leave with a plea for the team: there are only a few home games left, boys (really....a few....meaning three...and we thought this season would never end), so let's give the home crowd something to cheer about, mmmmmmkay?