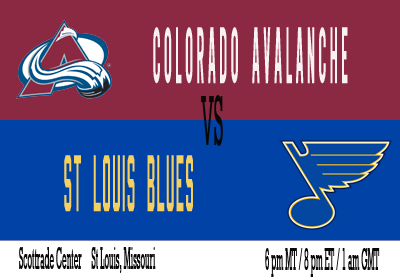 With both teams well out of the playoff hunt, the obvious backdrop tonight is the blockbuster trade. In 23 games with St Louis, Chris Stewart has 14 goals - 1 more than he had in 36 games with the Avalanche. And Kevin Shattenkirk recently scored his 40th point of the season, for those who voted for him during our roundtable last fall. He leads all rookie defensemen in scoring. Of course, Erik Johnson has been a tremendous upgrade for the Avalanche and his 10 points with the Avs is more than the output of all but 2 Avalanche defensemen on the roster (Liles and Ryan Wilson).

Of less obvious importance is the status of the draft picks also swapped in the deal. Colorado will be getting a 1st-round pick from St Louis as part of the deal. IF that pick is in the top 10 this year, the Blues can defer to 2012, when it belongs to the Avalanche no matter what. And, whichever year that pick comes this way, the Avalanche will send their 2nd to St Louis. Right now, the Blues would draft 9th this summer. A win tonight would move them past Minnesota and into a tie with Toronto at 84 points. Now, St Louis will have played one more game than the Leafs, so would be lower in the standings for the time being. However, they would have one more non-shootout win than Toronto, so if nothing changed in the standings the rest of the way, St Louis would end up with the 11th pick...and that pick would go to the Avalanche while the Blues would get the Avs' 32nd overall pick. Ryan O'Reilly was drafted 33rd overall, so that's no slouch of a pick. Some have speculated that the Avalanche may prefer for the swap to happen next year because of the projected deeper 2012 draft and the chance that the Blues' pick might improve. I've been wondering if the Blues pass on deferring even if they end up at #9 or #10. After all, it's not like that 2nd is going to get any better...

So, some Avalanche fans will be hoping for the Avs to lose to possibly improve their draft position, but I'm not sure it's going to matter in the long run. Personally, I'll be hoping for an Avalanche win, giving the Avalanche one measly 4-game series sweep on the season (they can still sweep the Stars). More than that, I'm hoping that Matt Duchene scores a few goals. Why? Because, John Tavares scored on Saturday giving him 52 goals and 66 assists in his career. Duchene currently is one goal behind and 51 / 66. That can't stand. Go Avs and go Matt.