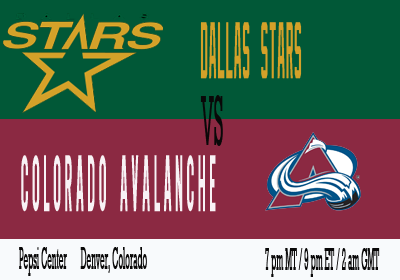 And then there were two. Two games left. The Tank Watch has nearly concluded; last night's loss kept the Avs in that precious 2nd pick slot. In order to lose it, the Avs need to win both of their remaining games, and Florida needs to lose both of theirs. If you think that's gonna happen, I've got some oceanfront property in Arizona with your name on it.

The boys can still ruin the Stars' chance at the playoffs. Avs win, Dallas is done, done like a longhorn steer's family jewels on a cattle ranch. The craziest thing is that, due to the parity that makes Bettman as giddy as a school girl with a unicorn backpack, a win by the Avs could also screw up the whole Western Conference playoff bracket. I guess the Avalanche aren't so easy to forget after all, eh Calgary, Dallas, Anaheim, Chicago, Nashville and Phoenix? (Dallas can finish as high as 5th if the stars align right [yeah, I went there], and Nashville, Phoenix and Anaheim are still in limbo without playoff spots even clinched...those would be your 5th, 6th and 7th seeds, respectively.)

Foote will NOT be playing tonight. He is hoping to play tomorrow Sunday though. No word about who's in net, but I would imagine it's Boods. I wonder who gets the last game of the season? If this season is Budaj's swan song with the Avs, I sure as hell hope he does.

Don't forget, the press conference for Foote's retirement announcement is on at 11 am MDT. You can stream the video here.