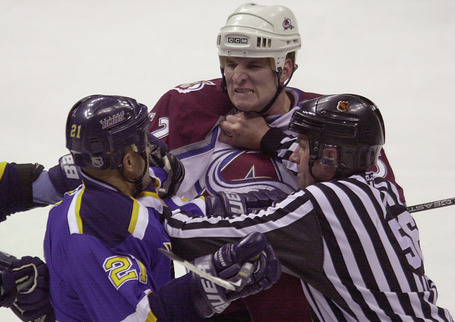 Adam Foote is expected to don the unipron tomorrow for what will be his final NHL game. To send him off, I thought I might re-post an article I wrote for the Avalanche Guild's Monthly Journal. I originally wrote this back in January, but I think this sums up one of his most obvious physical traits. No, not his nose. His toughness.

Colorado Avalanche defenseman Adam Foote is 39 years old, an age when many people are starting to feel the effects of approaching middle age. Knees start creaking, muscles start aching, eyesight starts fading and the volume on the TV needs to be just a little louder. But Foote is still out there, chasing around squirmy forwards nearly half his age.  At his age, that's impressive but not exactly unique. Like a used car, though, it's not so much the miles but the wear and tear. And Foote has a ton of wear and tear on the old body. Those are hard, hard miles on that old odometer.

Concussion.  Knee injury. Jaw Injury. Ankle injury. Back spasms. Hip injury. Sprained ankle. Pulled groin. Hamstring injury. Finger injury. Separated shoulder. Heel fracture. These are just some of the injuries suffered by Foote over the years. Upper body, lower body, inner body, outer body...Foote has seemingly had them all at least once. Foote is in his 19th season patrolling the blueline, and has never played in all 82 games (let alone 84, which was the schedule for his first three seasons). He won't get there this year either, as he's already missed time due to injury on three different occasions.

Avalanche fans are familiar with Karlis Skrastins, the NHL's Ironman for defensemen with 495 consecutive games played. For Skrastins to be able to shake off the day-to-day bumps and bruises and avoiding missing time for the equivalent of 6 straight seasons is a terrific accomplishment and Skrastins deserves all the accolades garnered for setting that milestone. Foote, in many ways, is the antithesis of an Ironman. As near as I can tell, his longest consecutive game streak is 74 games - a mark he set back in 1994.

That's not a knock on Foote at all. He has been a hard-nosed, full-tilt player his entire career. Since day one, he's been a tough, physical player willing to sacrifice his body for the good of the team. It isn't surprising at all that a player like that has been banged up over a long career. What is a bit surprising that he's been able to sustain his career for as long as he has. Only the toughest of the tough are able to sustain all the injuries listed above and still have a desire to go to the rink and strap on the skates to do it again.

As of the All-Star break, Foote had played in 1,144 regular season NHL games out of approximately 1,490 games that his team played. That means that Foote has missed about 346 games, or nearly 25% of his teams' games. Excluding a few maintenance days, Foote has been injured for the equivalent of more than four full NHL seasons. He's never missed fewer than three games in a season, and twelve times his games missed has been in the double digits. To stick around for 19 seasons while enduring that sort of consistent pain is as impressive as it is unique. While it's difficult to find stats that separate games missed due to injury with games missed due to healthy scratches, I couldn't find another modern era (1980's and beyond) defensemen with 1,000 career games that missed a higher percentage of games due to injury.

Hockey is a physical sport played by tough individuals. Other players have overcome serious injury (or injuries) to have productive NHL careers. And perhaps Foote isn't the most banged up defenseman to hit the 1,000-game mark. Regardless, he clearly has endured a lot of pain over the years and hasn't hung them up and, more impressively, hasn't changed his game. Night in and night out, he's still one of the most physical players on the ice. Oh, and he's always found a way to be there when it matters most to his teams; he's missed just two playoff games over his career.

No, Adam Foote is not an Ironman. But his resiliency over the years is impressive and laudable. He's been banged up many times over the years, and the miles are adding up. But the motor is still running, dents and all.

Thanks for 19 years of sacrifices, Adam. Here's to hoping that your next gig is much, much easier on the body.