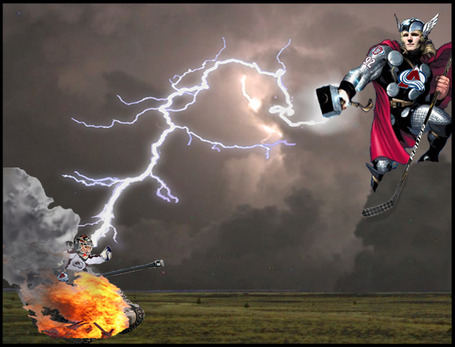 After the second season that never happened in the span of three years, SlamDunkTheFunk and Mike decided to take a long, hard look at how the Avs should go about team-building for the future.  In an effort to utilize some of the most successful and awesome models for team-building in the history of recorded err, history we turned to some of the best teams EVAR!!  And by that I of course mean superhero teams!

Mike: So let's start this conversation with a classic. The Avengers.

Some of our readers may not know the ins and outs of the Earth's Mightiest Heroes, but they were thrown together to combat the raging menace of the always incredible Hulk. That original team boasted some heavy hitters in the early stages of their careers, namely Thor, God of Thunder and Iron Man. But the team didn't REALLY come together until they found a frozen Captain America and thawed his WWII ass out and ended up making him an integral part of the team. Grade-A nutjob Norman Osborn once commented that the core of the Avengers team was The God, The Knight, and The Soldier. Who fit's those roles on the current Colorado roster or who is floating out there in the NHL that could fill those roles for the Avs?

SDTF: The God - We definitely missed the chance to toss Peter Forsberg on this list and call it day, eh? I'm going to have to go with Matt Duchene on this one. It's definitely premature, no doubt, but he's the only guy on this team that has the transcendent feel to him. He already has the buzz from the fan base and even around the city, casual fans have some recognition of the baby-faced kid with fire in his skates. If he continues to develop and we provide him ample talent on his wings, he could be The God for us for the foreseeable future. He's the lightning rod with the one-of-a-kind abilities only defined by The God.

Mike: You just couldn't answer that question without mentioning rods, could you?

Mike: You're right though, Forsberg was the slam dunk choice for the "God" role. Hell, he's even Nordic. However, I see where you're coming from on Duchene, but I honestly had him tagged as the Knight. Your point about inner demons still applies to him too. He's got a hellava lot of expectations and he's battled through slumps since joining the Avs. Plus, at his core (especially in recent years) Tony Stark has been a pretty adamant futurist and while some would put Hishon in that role, I still think it's Duchene's burden to carry.

SDTF: I really flip flopped back and forth with Duchene in the role of God/Knight but with the inclusion of Erik Johnson into the team-dynamic mix, it really seemed like it could be the kind of Sakic/Forsberg dynamic where Duchene assumes the role of face of the franchise/God mantle and Johnson has the quieter but certainly just as important Knight sidekick kind of thing. Hishon to fill the role of futurist is a really clever connection.

As for the Knight , I really think this is Erik Johnson. He's the key to this entire team's future. He has the strong leadership characteristics and never ending supply of toughness that every team absolutely has to have. Both Johnson and Stark have battled their inner demons (Stark with the alcoholism and Johnson with the massive confidence issues) extensively and have come out stronger on the other side of those wars. Truly defines the role of The Knight.

Mike:  Maybe I'm old school in my characterization of Iron Man (one of my earliest super-hero favorites) but I don't know if I see Johnson in that role.  To me, Iron Man (and by extension the role of the Knight) has always had power AND restraint.  I'm not sure restraint is a characteristic I see or even want in my top pair defenseman.  I want him to unleash hits and shots with wild abandon and make life difficult for the guys wearing the wrong color jerseys.  To me that's closer to Thor's role, but I'm not sure Johnson has the power to pull off that gig. Maybe one of the draft picks, especially if we end up with one of the L's? Anybody out there in Free-Agent Asgard for this spot?

SDTF: As much as the MHH meme mastering machine has photochopped Landeskog's head onto Thor, he might better fulfill the Knight role we're having trouble coming to terms with. His leadership and hard work are often considered his best attributes and by all accounts he will be the captain of a team down the line. Think Jamie Langenbrunner but with a cooler name and about 43 years younger. Under the criteria you're looking for, I could see Landeskog sliding right into that role and excelling. In terms of free agents on the market, based on my recent research project, I think the free agent market isn't the place to look for for cornerstone pieces right now. Unless you think the Avs are going after Brad Richards, we're going to have to snag The Knight in the draft or hope one of our current players/prospects develops properly.

Mike: You're right, the pickin's, they are slim and I don't see Richards wearing the A with pride next season.

What about the last, and arguably most important role, the Soldier?

SDTF:  The Soldier - This is the one where I have the most to say simply because we don't have it yet and that makes it much tougher to truly define. I think The Soldier is going to be snagged this summer in the form of a goaltender we can lean on. This WOULD have been Craig Anderson and he would have fit the mold so perfectly it's ridiculous. Right now, my favorite choice is Josh Harding. It's a logical choice in terms of hockey reasoning but from what I know of the guy based on his time in Houston, he's exactly the kind of guy you want between the pipes 50-60 games in a season. He's an exceedingly hard worker, puts his head down and leads solely by example and he would be the glue that really pulls the team together. Coming off a lost season this year would be kind of like un-thawing Cap, isn't it? It's too perfect for it to ever happen, though.

Mike: I actually like Paul Stastny as the Soldier just because of the discomfort factor exhibited by Cap being a man out of time and having a huge legacy-type burden to carry.  Hell, until recently SoS was rocking a wood stick.  If that isn't old-timey/quaint, I don't know what is.  But ultimately, yeah, I don't feel like we're anywhere near having this role filled out yet. If we had a real "The Soldier" on the roster right now, would this epic collapse have happened?

SDTF: Stastny as The Soldier would be an awesome comparison if SoS wasn't pillow soft...

SDTF:  To answer your question, no, I don't think if we had a Cap-like figure on the team the collapse would have happened quite the way it did. There were a ton of reasons the season went down the way it did and I really think it was a perfect storm of mitigating factors but it became pretty obvious we didn't have that one guy who would step up and absolutely REFUSE to go down without an epic fight to the bitter end. In this case, Dupuis doesn't count.  Ultimately, I think the Avs have potential pieces either already on the roster, in the pipeline, or have golden opportunities to snag them in the draft. The potential is there. It's just a matter of them all coming together to take down The Hulk.

Mike: Speaking of the Jade Giant, I'm assuming you're referring to Vancouver and the split personality disorder that is the Sedins?

Mike: For completeness' sake, who's this team's version of the Wasp and Ant/Giant-Man in 25 words or less?  I'm going to go with David Koci as the Wasp (annoying and stings like an actual bee AT BEST) and Joe Sacco as the Ant/Giant-man.  He gets a lot of the credit and a lot of the blame. He's probably not a wife-beater, though.  His defensive systems definitely count as an Ultron-level creation.

SDTF: I think I'll go with Galiardi for Wasp. Ant/Giant-Man, yeah sure, give it to Sacco. 18 words, not including these. Nooch.

Next time, SDTF and Mike will have a super nerd-gasm when we look at merry mutant team-building.  What say you, True Believers?