(Ed. Note: As the march to the beginning of the Free Agency period continues, we're bound to lose some friends along the journey. Also: This is a roast (like Puck Daddy's) and you will be offended by it, so don't take it so seriously.)

We're gathered here today to mourn the passing of Brian Elliott.  (And no, he didn't die - he just wasn't extended a contract by the Avs according to Dater.  And yes, you do have to sit there and look sad while you read this, even if you're secretly plotting which bottle of booze you're going to pop open in celebration as soon as you're done.)  I feel as if I should be the one to write this eulogy because I'm the one that came up with the inspiration for his MHH nickname.  "Lil' Tank" and I have had a very interesting relationship over the past few months, culminating in this post a while back.  After all we've been through, it seems only fitting that I am the one to bid him farewell.

We first met Brian Elliott on February 23rd, 5 days after the trade that sent Anderson to Ottawa.  The reason for the delay was simple:  the US Government didn't want him in this country (And who says they don't care for the welfare of their citizens?)  However, after that "unfortunate" delay because of his "visa", Elliott made his debut in goal against the Oilers, the worst team in the league by the stats.

I for one had high hopes for our new goalie.  We had just traded away the supposed "goalie of the future" in Anderson, and I was hoping for a determined and dedicated netminder in return that would help return us to the glory days.  And that's exactly what we got - a goalie that was hell-bent on proving to those blue and copper mother****ers that we could tank better than they could and get that first overall pick.  He truly was amazing that first night.  He let in 5 goals and made even Budaj look good in comparison.  Ah, the good ol' days.

Since he was so committed to the Avs tanking and getting that top pick, the next game saw the debut of the photoshop now deemed "Lil Tank".  Brian Elliott was a superb leader of the Avalanche First Tank Battalion - even though his GAA went down from the 5 the first night, he still manage to maintain an impressive 3.34 and let in at least a soft goal or two a night.  He was also one of the most reliable players during that time.  Even though the rest of the team struggled to score, we could always count on Elliott for 3 goals a night.  Consistency like that is hard to find these days, especially in the NHL. 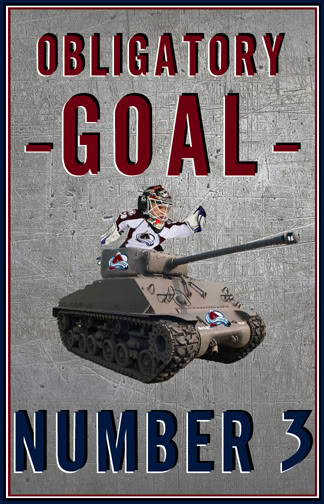 Now, that's not to say that he didn't lose sight of the overall goal on occasion.  I mean he did have that one game that he played well... or at least competently... or at least not completely suckily in.  Luckily, he still let up an easy goal in the shootout, so he kept the dream alive.  And he did show flashes of brilliance sometimes - never enough to actually, you know, win a game, but just enough to piss off the fans and make them shout, "now why can't you do that every night?!?"

Unfortunately, when the end of the season drew near, it became clear that no matter how dedicated Elliott was to getting his team the #1 pick, no one knows how to tank like Oilers.  I mean, those guys are pros.  Top pick two years in a row?  Now that's skill.  So, even though we weren't even "good" enough to win the tank race, Elliott still brought us within sight of it, despite our misguided winning streak at the beginning of the season.  And now we have a bright and shiny new Swede because of it.

So, thank you Brian Elliott.  You will be missed... remembered... by the Avalanche faithful for years to come.