(Well, we've been asking for it for months now. I finally decided to do the research and find an answer.)

Injuries suck. We all know this, perhaps better than any other team in the league. Not only were we the 2nd most injured team with 474 man-games lost, many of the injured players were in our Top 6. How can a team be competitive when that happens?

However, this is not the first year we’ve dealt with this. In ’09-’10, we also were the second most broken team in the league with 340 man-games lost. However, according to The Hockey News, "The Avs were at least lucky the time missed by its best skaters was minimal." When that happened, we made the playoffs. This year, we weren’t so lucky and ended up with the 2nd overall pick.

How can a team finish second in the league in injuries twice in a row? There are a few theories; however, one of the most prominent ones focuses on the glass at the Pepsi Center. 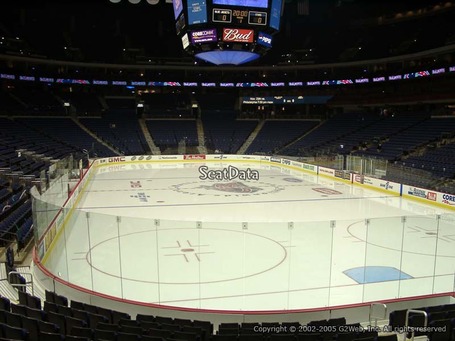 Above: Seamless glass, similar to the style at the Pepsi Center

Below: The newer style that uses metal between the panes of glass. 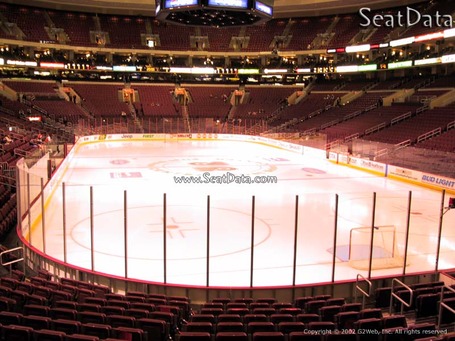 Seamless glass was popularized in the 90’s because it removed the metal dividers between the panes of glass, which allowed fans a better view of the game. However, because of the way this glass had to be supported, it lacked the give of the more traditional glass. In a 1997 New York Times article about the emerging glass style, Brendan Shanahan of the Detroit Red Wings stated, "It is very dangerous. It's like running into a brick wall." Although I’m sure there are quite a few people here who wouldn’t mind seeing Mr. Shanahan (or any of the Red Wings for that matter) run into a brick wall, this is also the glass that the good guys in burgundy and blue have been playing with since that time.

The Pepsi Center, which was constructed in the late 90s and opened in ’99, uses seamless glass. Over the years, most of the other teams in the league have come to the conclusion that it leads to more injuries, and currently only six teams league-wide use it (Calgary, Montreal, Minnesota, Nashville, Colorado and Phoenix). Since the man-games lost to injury stats are notoriously hard to find – especially in the off-season - I don’t have updated totals, but on March 24th, 2011, those teams stats were:

The difference between the seamless and non-seamless MGL per game numbers is .85. This means, on average, a team with seamless glass would lose 70 additional man-games over the course of an 82 game season than teams without it. And since MGL does not measure the caliber of player sitting out (a game lost by Matt Duchene counts the same as one lost by Matt Hunwick), this could drastically impact a season.

However, not all injuries are caused by hits into the glass. Some (such as Fleischmann’s pulmonary emboli midseason), are not hockey injuries and some (like Adam Foote’s broken foot) are caused by other hits/blocked shots/etc. Of the 47 injuries last year, I was able to rule out 34 because the glass was clearly not involved. Of the remaining 13, some obviously involved hits into the glass, but others were either diagnosed after the game (so the time of injury isn't known) or I couldn't find enough data to rule them out. With that in mind, here's a list:

These injuries account for 214 MGL, or 45% of the Avs' total. Even if you subtract Mueller's lost season, these numbers remain a scary 132MGL and 37%. That means seamless glass could have played a role in more man-games-lost for the Avs than 5 different teams had TOTAL at the 73 game mark (Carolina 56, Boston 92, Chicago 97, Phoenix 110, and Dallas128) .

This doesn't necessarily prove that having glass with more give would have prevented those injuries; however, the correlation is undeniable. That’s why the Player’s Association lobbied to remove all seamless glass in the league by the start of the 2011-12 season. On March 14th, the NHL agreed to their demands, so yes, the Pepsi Center will be getting new boards next year.

"Following the boards and glass review, the NHL agreed that the six NHL arenas that have seamless tempered glass would be required to be replaced with a safer plexiglass system by the start of the 2011-12 season. "

Other "Fun" Injury Facts and Links:

The Avs had 10 season-ending injuries this year (Mueller, Quincey, Fleischmann, Cumiskey, Galiardi, Stastny, Liles, Gaunce, Johnson, and Hunwick) and would have had 11 if Foote hadn’t decided to play on a broken foot. Only the Islanders had more at 13.